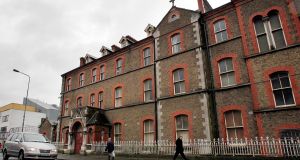 The exterior of the now derelict Sisters of Our Lady of Charity Magdalene Laundry on Sean McDermott Street. Photograph: Julien Behal/PA Wire

A proposal to sell an old Magdalene laundry site in Dublin to a Japanese hotel chain for €14 million is likely to face serious opposition when it comes before councillors next month.

The no-frills hotel chain wishes to build a new hotel, commercial and retail facilities, a gallery/event centre, a new community centre and a small supermarket. The proposal also includes 60 apartments for social housing and a permanent memorial to the women who were incarcerated in the laundry before it closed in 1996.

The council’s deputy chief executive Brendan Kenny said the money acquired from the sale will be invested back into the area.

“There is a history from the laundry. We are very conscious of that, but it is an area that suffers from drugs, murders and feuds. It has a really high concentration of social housing,” he said. “We think something different here will bring in more footfall and jobs and is the right thing to do.”

Mr Kenny acknowledged there was an argument for the development of social housing on the site, but the Toyoko proposal represents a “once off opportunity to bring much needed economic benefit including jobs to an area that has suffered badly over recent years from serious social issues”.

However, both Fianna Fáil and Sinn Féin members of the council have indicated that they will vote against the proposal.

Fianna Fáil councillor Mary Fitzpatrick said it is not in the interest of the city to sell property to a hotel chain “at the height of the worst housing crisis in the history of the State”.

She said the State should not be selling off land which is zoned - as the Magdalene Laundry site is - for any purposes other than housing.

“There is zero affordable housing in this area. How the State could sell off land that would be suitable for affordable homes at a time of greatest need is beyond me,” she said. “We should be looking to develop the site to its maximum potential to provide quality, sustainable affordable homes in the heart of our capital city.”

She suggested that a housing cooperative such Ó Cualann could be brought in to work on a suitable project.

Cllr Fitzpatrick said the nine Fianna Fáil members on the local authority will be voting against the council’s proposal when it comes before the July meeting. It is also likely to be opposed by Sinn Féin councillors who have the largest voting block on the council, with 15 of the 63 seats.

Dublin’s Lord Mayor Cllr Mícheál Mac Donncha said the best use of the site would be for it to be used for social housing for older people.

“We are not happy with the current proposals. We don’t buy the argument that there is too much social housing in the area. If we provide older people’s accommodation on site, that frees up other types of accomodation as well.”