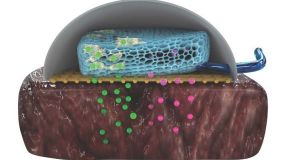 An illustration of the ‘Therepi’ device on heart tissue. Photograph: Peter Allen/Harvard John A Paulson School of Engineering and Applied Sciences

An implantable device that can be directly attached to cardiac tissue and enables better targeting of treatments following heart attacks has been developed by a team of scientists based in Ireland and the US.

Details of the novel device, developed by researchers from NUI Galway (NUIG), Harvard University and Massachusetts Institute of Technology (MIT), were published on Monday in the journal Nature Biomedical Engineering. It is due to undergo clinical trials in coming years.

After a person has a heart attack, complications frequently occur. These include additional scarring of cardiac tissue and “remodelling” – changes in the size, shape, structure, and function of the heart – which may ultimately lead to heart failure.

Multiple therapies have been developed to prevent disease progressing in patients, including drugs, proteins, and adult stem cells.

“The problems with delivering these treatments currently are they don’t stay at their intended site on the beating heart, can cause toxic side-effects and often require multiple doses to ensure a positive clinical effect,” explained study co-author Prof Garry Duffy, professor in anatomy at NUIG.

The device, called “Therepi”, is placed directly on the heart and acts as a reservoir for drugs or cells that can be refilled multiple times from a port under the skin.

“It allows keyhole surgical placement of a depot or pouch to the outside surface of the heart, and this pouch can be topped up with drugs or stem cells using a port that sits just below the skin,” Prof Duffy said.

This system “has vast potential” as a tool for optimising targeted drug delivery, he said, while allowing “multiple, non-invasive therapy replenishments over time”.

Prof Ellen Roche of MIT, a former NUIG researcher, said the study demonstrated that Therepi “can repeatedly deliver drugs, and increase retention of cells at the heart to increase function”.

“This is only the beginning of multiple ongoing studies that will use this system as a platform device for therapy delivery to the diseased heart,” added Prof Roche.