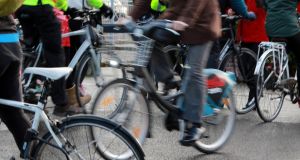 More than a quarter of adults in Ireland cycle at least once a week, a new survey states. Photograph: Nick Bradshaw.

More than a quarter of adults in Ireland cycle at least once a week, with the figure rising to almost 40 per cent in Dublin, a new study has found.

Some 38 per cent of respondents said they cycled regularly (once a month), with 27 per cent saying they get on their bike more than once a week while 40 per cent never cycle.

The findings suggest there is a significant gender gap when it come to cycling in Ireland with 45 per cent of men saying they cycle frequently compared to 30 per cent of women.

Young people were more likely to get on a bike than older people with more than half (56 per cent) of the 25-34 age group saying they cycled frequently, compared to less than a third of those aged 45-54.

The survey of 1,000 Irish adults, carried out in May by Coyne on behalf of One4All, suggests there is a significant urban-rural divide when it comes to cycling. Thirty-nine per cent of Dubliners said they cycle at least once a week, compared to just 17 per cent of respondents in Connacht and 27 per cent in Munster.

Under the Government’s Cycle to Work scheme, bicycles and safety equipment up to the value of €1,000 can be bought free of tax, PRSI or USC, which can save participants up to 52 per cent of the cost.

Nearly half of those who responded to the survey said they felt cycling infrastructure in Ireland could be improved.

The National Transport Authority earlier this month announced plans for new bus corridors in Dublin, which include improved cycle lanes.

2 More than half in North want vote on a united Ireland, poll finds