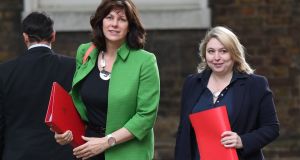 The Northern Secretary has said “mistakes happen” after an internal British government briefing paper was accidentally leaked to reporters ahead of a press event in Co Tyrone.

The Northern Ireland Office document outlined what Karen Bradley’s responses would be to media questions “if pressed” about Brexit, abortion and other contentious issues.

Ms Bradley spoke to reporters on Monday after she announced the allocation of £140 million (€159 million) of British government funding to support the development of the new Strule Shared Education Campus Project in Omagh.

On whether she was embarrassed about the leak, she said: “Mistakes happen.”

She added: “You [the media] expect ministers to know what they are talking about and are properly briefed.”

When questioned on abortion, she repeated the British government’s position that it is a devolved matter.

The leaked briefing papers noted a commitment to restoring Stormont, which has not functioned since January 2017, and that an “appropriate balance” at present was providing the option for women to travel to England for a free abortion.

Asked what she had to say about the women from the North who are poor, have caring responsibilities or are in coercive relationships and therefore cannot travel, Ms Bradley did not answer the specific question.

She repeated her government’s position on it being the Stormont politicians’ job “to come together and make sure they deliver the abortion reforms that they think are needed for the people they represent”.

She described the failure of Westminster to act and either let women pursue abortion law reform through the courts or let other MPs try to drive through change as “shameful”.

Alliance for Choice Derry spokeswoman Goretti Horgan said the Conservatives clearly did not want to “upset” the DUP, which keeps them in power through a confidence-and-supply arrangement at Westminster.

A statement from the Christian charity Care said it welcomed the information in the leaked documents as it meant, “Westminster government have no plans to impose abortion laws” on the North.

Unlike other parts of the UK, the 1967 Abortion Act does not extend to Northern Ireland. Abortion is permitted only in cases where a woman’s life is at risk or if there is a risk of permanent and serious damage to her mental or physical health. Anyone who unlawfully carries out an abortion could be jailed for life.

Meanwhile, Sinn Féin took issue with the briefing notes on legacy issues relating to Ms May.

The party said claims about the “unfairness” of legacy investigations had been exposed as false by the briefing notes.

“Her [Theresa May’s] remarks that the only people being investigated over conflict-related deaths are British armed forces and police officers caused deep offence and are patently untrue as evidenced by the official statistics,” said Sinn Féin MLA Linda Dillon.

“Now her government’s own confidential briefing reveal that they know her claims are false. They state clearly that a number of non-state investigations are already under way and that the Historical Investigations Unit will examine more deaths of state forces than those caused by them.

“This directly contradicts what Theresa May told the House of Commons, yet she has still failed to withdraw remarks which caused great hurt to many victims’ families.”