President of College of Psychiatrists resigns in protest as HSE consultant

Dr John Hillery was not due to retire until 2022; accuses HSE staffing failures 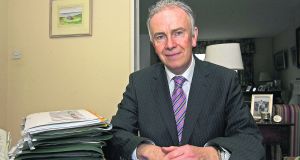 The president of the College of Psychiatrists Ireland has resigned as a consultant psychiatrist in the HSE in protest over the treatment of staff and patients within the State’s mental health services.

Dr John Hillery, son of former Irish president Patrick Hillery, quit the clinical post in February after nearly 30 years working in mental health and intellectual disability services. He was not due retire from his clinical post until 2022.

Speaking at the Family Carers Ireland conference, Dr Hillery warned that consultant psychiatrists were resigning due to the lack of adequate resources and accused the HSE of failing to deal with “major staffing problems”.

He criticised the Government for failing to increase the budget for mental health services, despite recommendations from the Vision for Change strategy more than a decade ago.

The failure to implement reports and legislation which would make life easier for patients, carers and those supporting them is “another sign of a lack of true commitment to change”, he said.

Last week Dr Kieran Moore, a specialist consultant paediatric psychiatrist, told an Oireachtas committee he was leaving his post in the southeast’s public mental health service as the scenario he faced was “untenable and unsafe”. He said two of his colleagues were doing the same, which the committee heard could leave youths in Wexford and Waterford without a consultant psychiatrist from next month.

Dr Hillery said many doctors were faced with the “moral distress” of not being able to access the resources or care needed to help their patient and are finding themselves in “ethically compromising situations” on a regular basis in a system where bureaucracy has “gone mad”.

Last summer the former consultant said he had to cover two clinical posts while trying to advocate for respite care for children with autism once they finish school. “Young people with autism are used to respite care, they need that continuity but at the time of greatest change in their lives from school to adult services their parents are often told we don’t know if the care will continue,” he told The Irish Times. “You get to the stage of asking why is this happening every year?”

Dr Hillery described the Hiqa review system as a “box-ticking exercise” and “whack a mole regulation”, saying it often led to the transfer of vulnerable people to hospital settings that do not suit them. He warned that without interaction with consultants it was impossible to ensure the best outcome for the patient.

“Reports come from Hiqa and you’re not entitled to question them. I’m a great believer in oversight but it has to be interactive, working together for improvement.

“Regulation is vital but must be done in a way that deals with poor practice but is interactive and formative in nature, supporting good practice and helping service providers who want to improve . . . rather than having blaming and shaming as the only way to force change.”

Dr Hillery said the HSE’s failure to retain medical graduates was not only connected to level of income but more importantly quality of life. He said reports of how systems work in Australia and Canada were pulling young doctors from the Irish system.

“The optics of the mental health division are disappearing, the budget is too low and it’s all discouraging our trainees in psychiatry.”

Research carried out by the College Of Psychiatrists in collaboration with the Carers Association in 2009 found that more than half of all carers experienced being mentally and physically drained by their role.

More than 50 per cent of the carers surveyed said they had a medical problem - the most frequent being back injury - while over half reported being diagnosed with a significant mental health problem. Many carers reported suffering from anxiety and depression.

Dr Hillery said his experience and interactions as a doctor in Ireland had “fuelled anger that a modern democracy such as ours does not seem to cherish all the children of the nation equally, our founders’ aspiration”.

He questioned how the Government could afford the new Metro Link but was unable to improve resources within the health sector.

On Tuesday Professor of Primary Care Medicine at the Royal College of Surgeons Susan Smith warned that the health system was “in crisis” and that there was a need for “radical reform”.

Prof Smith told RTÉ’s Today with Seán O’Rourke show that health staff were being reduced to “fire fighting” and underlined that referrals for children with mental health needs were being declined without assessment.