‘Little or no scope’ for income tax cuts in budget, says ESRI 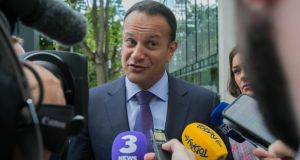 Taoiseach Leo Varadkar during the official opening of AWS (Amazon Web Services) offices on Burlington Road, Dublin, on Monday, where he indicated that avoiding overheating in the economy would be a major priority of the budget. Photograph: Gareth Chaney Collins

The Government has been warned by the State’s economic think tank there is “little or no scope” for cutting income taxes in the October budget.

The Economic and Social Research Institute in its latest commentary has urged the Coalition to avoid stoking an economy that is showing signs of overheating, and also to keep a close eye on credit growth.

Senior ESRI figures said they were concerned about the the impact that budgetary tax cuts would have on the economy. Prof Kieran McQuinn said he would be “wary of stimulating the economy” through any cuts in the personal tax rate, arguing that investment in the new National Development Plan (NDP) would be preferable.

Because income taxes were not having “a restrictive impact on the labour market”, there was “no reason” for income tax cuts, he argued. Such changes could also tilt the pendulum towards overheating of the economy.

The think tank played down fears of a house price bubble, though it expects house prices to continue to rise.

Strong growth is likely to persist in the Irish economy through 2018 and 2019, the ESRI said, on the back of underlying trends in taxation receipts and overall consumer and producer sentiment.

The commentary coincided with Taoiseach Leo Varadkar strongly ruling out an expansionist or election budget in October by saying the Government’s main priorities were to reduce its debt burden and not increase borrowing.

The Taoiseach on Monday gave a strong signal the budget for 2019 would be cautious and conservative. “At the current state that we are in in our economic cycle, more borrowing means a bigger deficit and higher debt does not make sense. We don’t want to repeat the mistakes of the past.”

Speaking in Dublin as Amazon announced 1,000 new jobs over the next two years, Mr Varadkar indicated that avoiding overheating in the economy would be a major priority of the budget.

Minister for Finance Paschal Donohoe will publish his Summer Economic Statement on Tuesday. It outlines the deficit the Government will aim for in 2019 as well as an outline of the budgetary package.

Asked if the fiscal space – the amount of leeway the Government will have in the budget for tax cuts and spending increases – would be about €3 billion, Mr Varadkar confirmed it would be in that “ballpark”. Some €2.6 billion has already been committed to expenditure measures such as public service pay increases and Irish Water.

It means new measures in the budget might not amount to much more than €500 million between spending and tax reductions.

The economic statement will underline that the Government does not plan to use all the room for manoeuvre available to it in the budget. It will say this would not be appropriate with the economy already growing strongly, a point also made by the ESRI.

Spending all the cash available under EU rules in the budget would involve the adoption of pro-cyclical policies not appropriate to our position in the economic cycle, the statement will warn.

Mr Donohoe is expected to focus on reducing borrowing, avoiding overheating and exposure to other risks such as Brexit, changing international tax landscapes and rising geopolitical tensions.

There is an obligation on Fine Gael to involve Fianna Fáil in the budgetary process under the confidence and supply agreement. On Monday, its finance spokesman Michael McGrath said he was aware for some time of risks and it would be foolish to think the favourable economic backdrop would continue indefinitely.

“We want to see a budget that prioritises the two core areas where the Government has failed – housing and health – but we also want the competitiveness of domestic enterprises put front and centre in Budget 2019, ” he said.

While new mortgage lending is “rapidly increasing” – rising by 13.5 per cent in the first quarter of the year – the ESRI said it is not yet “unsustainable”. However, it did warn “careful monitoring is required”.