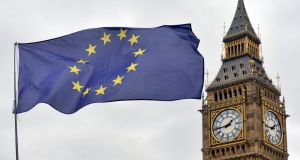 Theresa May’s government has made a proposal for the backstop that would involve the whole of the UK remaining within the EU customs territory, but it has not yet set out its proposals for regulatory alignments. Photograph: Victoria Jones/PA

The backstop arrangement to guarantee no hard border after Brexit will not require full regulatory alignment with the single market, a Brexit minister has insisted.

Robin Walker told the House of Lords EU committee at Westminster that the British government disagreed with the European Commission about the extent of regulatory alignment that is needed.

“What we’re talking about is those aspects of regulatory matters which are important to avoid creating a hard Border or undermining North-South co-operation, he said.

“That isn’t the same as saying – and I think this is where we have a discussion to have with the Commission – the full single market arrangements,” he said.

“We are talking about how you preserve some of those arrangements . . . rather than the alternative interpretation, which is that you have to have the whole of the single market in place. That’s where I think it will be useful to take the discussion forward.”

Prime minister Theresa May’s government has made a proposal for the backstop that would involve the whole of the UK remaining within the EU customs territory, but it has not yet set out its proposals for regulatory alignment.

Mr Walker said he hoped that a new security partnership with the EU would ensure that the Garda and the Police Service of Northern Ireland will continue to co-operate as they do now, with instruments such as the European Arrest Warrant.

“We are pushing ahead with a very ambitious approach to the future security partnership. All the evidence is that there is very strong interest in continuing co-operation in this area,” he said.

“We do think that when people take a long, hard look at this they will recognise it is in the EU and in the UK’s interests for these mechanisms to continue.”