Unions warn against threats of AI and Brexit to worker rights 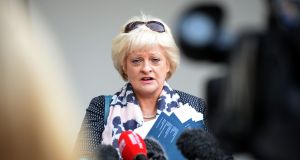 Trade unions have vowed to oppose any move by employers to use technological advances in robotics, automation and artificial intelligence as tools to exploit workers.

Unions also pledged to fight any Government plan to restrict the right to strike in some essential services, as proposed recently by Taoiseach Leo Varadkar.

The biennial conference of the Irish Congress of Trade Unions in Belfast also passed a motion calling for the Government to introduce legislation to give union officials the right to enter workplaces to represent, organise and recruit workers.

In an address to the conference, Ictu general secretary Patricia King also urged the Government to scrap the existing reduced VAT rate for the hotel and food services sector, which she described as “completely untenable”.

She said three-quarters of all workers in the accommodation and food services sector earned less than €400 per week.

“The same sector has seen a consistent strong profit performance over recent years and since 2011 has enjoyed a reduced VAT rate, denying the State at least €660 million in tax forgone. Contrast this to their belligerent refusal to engage in a Joint Labour Committee where workers’ terms and conditions could be enhanced.”

Ms King told the conference that robotics, automation and artificial intelligence were transforming everything from retail to banking to the provision of medical care.

She said many such developments had caused job displacement and some predictions on what is to come were “bleak”.

She said that very often within the so-called “gig economy”, the companies involved operated a business model that avoided adherence to employment rights including the right to strike in some essential services, as proposed recently by Taoiseach and regulation.

“It is vital that all steps are taken to ensure that this technology transition is managed in a just and equal manner and not allowed to be used as a tool for worker exploitation.”

“That is not radical. That is regressive and every trade unionist across the country will vehemently oppose it.”

Ms King also said that any agreement reached on Brexit must recognise human rights and protections that underpinned the constitutional settlement on the island of Ireland.

“Brexit must not be used as a pretext to dismantle hard-won workers’ rights and protections and to drive down employment standards.

Meanwhile, the president of the trade union Mandate, John O’Donnell, said unions were facing the biggest crisis since the foundation of the State. He said they represented 57 per cent of all employees in the 1970s . He said the representation levels were now half that amount.

He said a key to rebuilding the movement was the right of members to have access to their union and for union officials to have discussions with workers in the workplace.

He said in Australia and New Zealand, with 24 hours’ notice unions can legally enter a workplace to carry out inspections of workplace rights and health and safety issues as well as for consultations with members.

On the other hand, he said, in Ireland Mandate organisers had been physically removed from the car parks of some retailers such as Ikea.

Mandate official Willie Hamilton maintained that a number of workers at Tesco had faced disciplinary action for engaging in industrial action.

President Michael D Higgins urged that tax derived from employments that receive benefits from State investments should be recycled to fund greater spending on education.

He told the conference that the truth was that it was public investment that created the infrastructure “for the many corporate entries into the market in so many areas”.