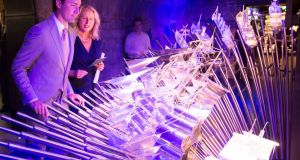 Prime minister of Canada Justin Trudeau has roots in Co Cork, according to research carried out by Epic, the Irish Emigration Museum.

The research was presented to the Canadian leader at a visit to the museum and Irish family history centre on George’s Dock, Dublin, on Tuesday afternoon.

Through his mother, Margaret Sinclair, Mr Trudeau is a direct descendant of the Bernard family from Bandon, Co Cork.

In 1661, Francis Bernard married Mary Freake and had six daughters and two sons, the research shows. Mr Trudeau is descended from their younger son, Arthur Bernard, who was High Sheriff of Cork in 1697 and MP for Bandon from 1713-14.

In 1695, Arthur Bernard married Anne Power, of Mount Eglantine, Co Waterford. The Powers and their relatives the Boyles were very involved in the intellectual elite of late 17th and early 18th Century Ireland. Arthur and Anne also had a large family, 10 daughters and four sons, including Trudeau’s six-times great grandfather, Francis Bernard. Francis got his degree from Trinity College in 1729 and moved to England.

His grandson’s generation relocated to Singapore and Malaysia, then part of the colonial Indian “station”. They remained there for a century, until 1906 when the family emigrated to Canada.

“That sounds true to the family tradition,” Mr Trudeau responded. He said he was looking forward to reading the research.

Minister for Foreign Affairs Simon Coveney, who accompanied Mr Trudeau to the museum, said once everyone in Bandon heard where the prime minister was from, it would be all over the local newspaper.

“Better hope I don’t run against you,” Mr Trudeau joked.

“Well, we’ll both stay on our sides of the Atlantic,” Mr Trudeau answered.