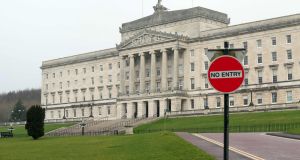 Unionists have called for an opportunity to debate and change Northern Ireland’s new abortion laws, which came into force on Tuesday.

DUP MLA Paul Givan said his party wanted to “vote upon the issue and then seek to take forward our own legislation in respect to it”.

Abortion services are now available in Northern Ireland without restriction until the 12th week of pregnancy. Abortions are also available up until 24 weeks if the continuation of the pregnancy would involve a risk to the woman’s physical or mental health greater than that of termination, and with no time limit in the case of severe foetal impairment or fatal foetal abnormality, or if there is a risk of death or grave permanent injury to the pregnant woman.

Abortion was decriminalised in Northern Ireland in October as a result of legislation passed in the UK parliament in the absence of a devolved government at Stormont, which has since been reestablished.

The UK government published the legal framework for access to abortion services in the North last Wednesday.

Mr Givan said “for many people this is a law which is taking life and which requires an urgent response”. He asked Assembly Speaker Paul Maskey for guidance as to when MLAs would be able to discuss and debate the law change.

“We will want to have a motion heard, we will want to seek legislative change so that we have a regime in Northern Ireland that reflects what I believe will be the will of the people on this issue,” he said.

Mr Maskey said scheduling was a matter for the business committee.

Traditional Unionist Voice leader Jim Allister said that while “the minds of us all at this difficult time are very much focused on the saving of lives, therefore it is all the more abhorrent and perverse that at the very same time we have regulations coming into effect today which will sanction the killing of the unborn”.

Mr Allister urged the Assembly to “find time to reverse this outrageous obnoxious situation and to find voice and to give voice to the unborn”.

Alliance Party MLA Andrew Muir said the Assembly “had an opportunity to legislate for these issues, and didn’t” as it was not sitting.

“This place had an opportunity to affect that change and it failed and we’re a new situation now and I think we have to move forward,” he said.

SDLP MLA Matthew O’Toole said he recognised “the strength of feeling on the benches opposite” but he was glad healthcare for women in Northern Ireland had “evolved to a place where women can access essential services that people in other parts of the UK and now other parts of Ireland can access”.

Caoimhe Archibald, of Sinn Féin, said it was “only right and proper that woman can access abortion services without having to travel, that they are free to be able to have healthcare in a modern and compassionate way”.

A number of MLAs called for clarity on how the coronavirus crisis would impact on women accessing abortion services and how the services would be implemented in light of ongoing pressures on the health service.

Green Party MLA Clare Bailey called for telemedicine services to be put in place, as in England and Wales, to allow women to be prescribed abortion pills over the phone and to take them at home.

“We heard yesterday of a young woman from Belfast who could not travel to England for an abortion because of Covid-19 restrictions and tried to take her own life,” she said.

“Our government must ensure that both patients and medical staff are not placed at unnecessary risk during this pandemic.”