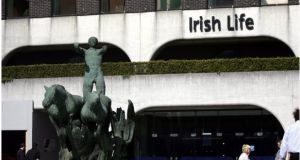 The indication comes as a result of the Government’s decision to bring all private hospitals under public control during the pandemic. Photograph: Bryan O’Brien

Irish Life Health has become the first private health insurer in Ireland to indicate to its customers that they can expect a discount in the months ahead as a result of the Government’s decision to bring all private hospitals under public control during the coronavirus crisis.

It has not yet indicated by how much premiums will be impacted as a result of the crisis and the reduction in the level of private health care available in the State .

The changes to Ireland’s health system that will impact many health insurance customers and with the establishment of a single national healthcare response to the Covid-19 crisis access to private hospital services will be significantly restricted to critical and time dependent medical care.

In a letter to customers, the chief executive of Irish Life Jim Dowdall promised that all its customers would be “treated fairly” as a result of a significant reduction in the level of healthcare available through the private system.

He said that the company would see a reduction of its overall claims for private treatments in the weeks and months ahead and said it was engaging with the Department of Health and other parties “to understand the likely impact of the changes and to discuss initiatives to support [customers] at this time.

Mr Dowdall said that once the details had been clarified it will advise customers of how the changes “will be reflected in the premium you pay for your health insurance plan and how you will be compensated for this period”.

Irish Life Health said it was “fully committed to supporting the Governments’ response to this crisis and also ensuring that you are treated fairly”.

Meanwhile health insurance consultant, Dermot Goode of totalHhealthCcover.ie said that while private healthcare as we know, it is suspended for a temporary period of up to three months it remained unclear if private out-patient appointments will still go ahead.

He said some private MRI scan centres may still function as normal, but this is yet to be clarified;

A key question for insurers is whether the full levy of approximately € 450 per member will still be payable in full during this period.

“We have been advised that once the insurers have absolute clarity on the specifics of the deal and the impact on claims, only then will they be able to confirm what concessions [if any] will be forthcoming. It could be later this week or even next week before any further specifics are available,” he said.

He advised health insurance customers currently worried about the affordability of their cover to engage with their broker or their insurer as there may be short-term options available to them to reduce their costs but still remain insured.

1 Coronavirus: HSE experts support the early reopening of schools
2 Irish planning for no-deal Brexit to restart as EU-UK talks go badly
3 Quarantine may be lifted for arrivals into Ireland from countries with low Covid-19 cases
4 The momentum behind calls to ease lockdown may become irresistible for politicians
5 All students will not return to school even if social distancing relaxed – McHugh
Real news has value SUBSCRIBE