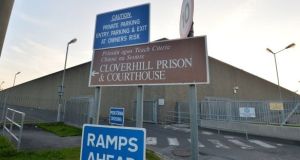 The number of prisoners on temporary release has almost doubled, close to 600, since the coronavirus crisis began File photograph: Alan Betson/The Irish Times

The number of prisoners on temporary release has almost doubled, close to 600, since the coronavirus crisis began. The Irish Times understands while there have been no confirmed cases of the virus in the prison system, a number of prisoners with symptoms have been placed in isolation at Cloverhill Prison, Dublin.

The facility’s F Unit, which has spaces for 20 prisoners, was unoccupied at the start of the coronavirus, also known as Covid-19, outbreak. It had been earmarked for juveniles in the event it would be required when St Patrick’s Institution on the Mountjoy Prison campus, north Dublin, was closed. However, the Cloverhill unit was never required and has in the past week been put into use as an isolation facility for symptomatic prisoners.

Almost two weeks ago the Irish Prison Service flagged consideration was being given to releasing some prisoners as a precautionary measure to better position the service for any outbreak of the virus.

While that number may fluctuate marginally, the Covid-19-related significant pattern of releases is now completed. The number of people in prisons in the Republic declined for years during the economic collapse as crime rates fell, ending overcrowding in the jails. However, in recent years that trend has been reversed, which has put pressure on all aspects of the prison service. This has included prison medical facilities and having spare capacity in the system so prisoners with the disease could be moved away from other prisoners.

Meanwhile, retired officers are being asked to make themselves available of required during the outbreak. Irish Prison Service senior management are keen to compile a list of retired prison officers who could come back to work for a short period if they were required. This may arise if prison officers were infected and were on sick leave or if they were forced into isolation because they had been in contact with a confirmed cases.

One source said the list being compiled as a “prison officers’ subs bench”. Another source said those former officers who expressed an interest and willingness to come back could be deployed in any position, including on landings dealing with prisoners, if the need arose for them. “Retirees who express their interest will be contacted if their skill set, availability and geographic preference match with the emerging needs of the prison service,” an Irish Prison Service spokesman said in reply to queries. “This means we are responding to needs as, where and when they arise. We cannot predict where the need will arise.”

Informed sources said the decision to grant hundreds of prisoners temporary release was part of the same planning as asking retired officers to express their interest in returning to work for short periods.