North gets additional £912m from British government to tackle Covid-19 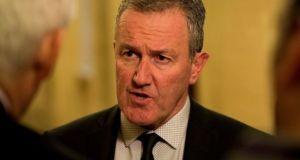 The Northern Executive has received £912 million in special funding from the British government to address the Covid-19 crisis, the North’s Minister for Finance Conor Murphy disclosed in the Assembly on Tuesday when publishing his budget for the coming year.

In terms of the regular budget, Mr Murphy told Assembly members that £12.2 billion will be shared between the Executive departments in 2021 which is an increase of just over 8 per cent on last year’s allocation.

A further £278.6 million is to be allocated to the Department for Agriculture, Environment and Rural Affairs for farm support payments which replace the EU Common Agriculture Policy payments.

Mr Murphy said an additional £70 million of central British funding would be allocated to departments while on the capital side some £1.6 billion would be spent in the coming year.

Mr Murphy indicated that because of the crisis departments would have a degree of “flexibility” in terms of spending.

“In difficult circumstances this budget delivers additional funding for our citizens, for our workers, and for our businesses,” he said.

In relation to coronavirus, Mr Murphy said: “Personal Protection Equipment has been ordered, car parking fees have been removed and public transport has been made free for key health workers to help those leading the fight against Covid-19.

He added: “Development of this budget began before the onset of Covid-19 and has been overshadowed by the unprecedented public health crisis we face, a health crisis that impacts on every area of our lives. Protecting lives and livelihoods from the pandemic is now our number one priority.”

The Sinn Féin Minister said that, in order “to ensure no additional burden on households during this difficult and uncertain time”, he was freezing domestic rates at current levels. Domestic rates, unlike in the Republic, are paid by householders in Northern Ireland.

Mr Murphy said he was also reducing business rates which, effectively, would mean an 18 per cent reduction on the figures for last year “which will benefit all business ratepayers”.

Under January’s New Decade, New Approach deal which restored the Northern Executive the British government pledged to provide a £2 billion financial package over five years to help the Executive and Assembly begin working on a “sustainable footing”.

At the time and ahead of the Covid-19 crisis which prompted emergency funding for businesses and workers Mr Murphy described the promised funding as “woefully inadequate”.

When delivering his budget in the Assembly on Tuesday Mr Murphy complained that “in real terms our block grant remains some £360 million below pre-austerity levels when comparing like for like funding”.

“Over that time the pressure on vital public services has increased. Public expectations were raised considerably by the New Decade New Approach document. But the British Government did not provide the funding necessary to deliver these priorities,” he added.

Mr Murphy said that nonetheless he was “able to deliver a budget that, compared to last year, provides real term increases to all departments”.

During questioning about the budget, the DUP North Antrim MLA Paul Frew referred to companies which were making items to save lives during the crisis. He added that he was “deeply worried” to have been informed that some Sinn Féin “party activists” had been involved in “intimidating and harassing” a number of such firms to close down completely.

Mr Murphy said that it was a matter of regret that Mr Frew made such allegations “without any substance”.

He added: “Of course if you are aware of accusations which are essentially criminal behaviour you have an obligation to report those to the police and I hope you have, rather than simply bring them here for publicity purposes.”

Traditional Unionist Voice leader Jim Allister asked that in light of the current crisis would the Minister agree that it would be “unconscionable” to spend money on Ulster Scots and the Irish language now, as promised in the New Decade, New Approach deal.

Mr Murphy said he was “heartened” by the fact that it seemed that Mr Allister’s only concerns around budget spending should relate to these two matters.