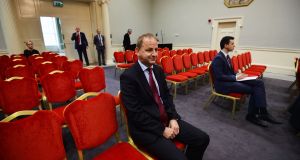 Major investigations into a series of Garda controversies, including the Garda’s handling of whistleblower Sgt Maurice McCabe, are being delayed because of a lack of investigators, the Garda watchdog carrying out the inquiries has said.

The Garda Síochána Ombudsman Commission (Gsoc) has since May 2016, been investigating claims, outlined under Dáil privilege, that two Garda members planned to mislead the O’Higgins commission by suggesting Sgt McCabe acted with malice when allegedly lodging a complaint against a senior colleague.

The continued fallout from the approach taken by Garda Headquarters to Sgt McCabe at the O’Higgins commission has over the past week put at risk the position of Tánaiste Frances Fitzgerald.

It has been alleged, under Dáil privilege last year, that two officers were set to inform the O’Higgins commission that at a meeting with Sgt McCabe he admitted acting with malice in making a complaint.

It was also stated in the Dáil that Sgt McCabe produced a recording of the meeting, which he had secretly made, that contradicted the account about to be given to the O’Higgins commission by the two officers.

“This would have been a criminal offence under section 18 of the Commissions of Investigation Act 2004 but for the providing of a recording by Sgt McCabe which resulted in the alleged withdrawal of these witnesses,” Mick Wallace TD told the Dáil on May 25th, 2016.

“Sgt Maurice McCabe would be buried by now if he had not taped the conversation,” he added in the same Dáil debate.

This allegation – that fabricated Garda evidence was to be given until a recording was produced to disprove it - was not dealt with in the report of the O’Higgins commission, published in May, 2016.

The then Garda commissioner Nóirín O’Sullivan asked the then minister for justice, Ms Fitzgerald, to refer to the allegation to Gsoc for investigation.

Litigation has also been commenced, against several media outlets, by the two officers whom Mr Wallace claimed in the Dáil were “allegedly prepared to perjure themselves… in order to falsely impugn Sgt McCabe’s motives”.

The two Garda members believe some reports about the controversy defamed them and earlier this year they commenced their legal actions.

The Gsoc inquiry into the allegations commenced 18 months ago. However, progress has been slow.

The Garda watchdog was forced to apply for a court order for documentation from the O’Higgins commission in January.

Some of the documents were missing and not supplied until March. Correspondence then took place with the Chief State’s Solicitor Office up until mid-April at which point the prospect of a further court order was raised.

However, this was averted when solicitors for Sgt McCabe “agreed to supply documentation to Gsoc”, which was received on June 8th.

Gsoc said it was now “dealing with a number of significant investigations” including governance issues in the Garda College, Templemore, and the circumstances around the shooting dead of Garda Tony Golden two years ago. It was also dealing with the Charleton tribunal.

“These delays could be mitigated by the provision of further investigators, such as has been made available for the investigation of protected disclosures.”

The Department of Justice had not responded last night to request for comment on Gsoc’s remarks on the shortage of investigators delaying its work.