Two-thirds of Royal College of Surgeons graduates to leave Ireland 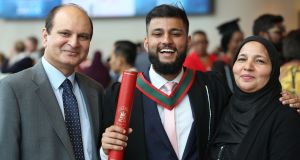 Just 84 graduating doctors out of a class of 275 from the Royal College of Surgeons in Ireland (RCSI) plan to stay in Ireland.

The Irish Medical Organisation (IMO) and opposition politicians say more needs to be done to encourage students from abroad who study medicine in Ireland to stay and work in the Irish health service.

A large proportion of students at the college are international students who are studying in Ireland on student visas. The RCSI graduating class of 2017, who were awarded their degrees on Wednesday, had students from 25 countries, including Indonesia, Qatar, India and Saudi Arabia.

“Doctors and nurses are leaving due to the state of the health service,” Ms O’Reilly said. “In order to truly address the skills shortages in the health service we need to address the key issues of working conditions, facilities supports, training opportunities, and pay for our nurses and doctors.”

Fianna Fáil’s health spokesman Billy Kelleher said “too many of the medical students who undergo training in Ireland are leaving to work elsewhere”.

“There are large numbers of foreign students graduating from Irish medical schools every year, and too many of them end up being lost to the Irish health system.”

Most RCSI international students plan to return home after graduating, and Irish students enter a year-long intern placement in the HSE after finishing their studies.

Ahmad Alrimawi, originally from Palestine, lived in Canada before coming to study in Ireland. He said he decided to apply for a place in the HSE’s graduate intern scheme. “I kind of fell in love with the place.”

Sinead Spencer (33), who was top of the 2017 class, said her preference would be to work as a GP in a local community rather than working in a Irish hospital.

“I’m hoping to stay in Ireland; my family is here. I’m from a rural town called Hospital in Limerick. I have a real passion for GPs being involved in the community, so I feel that’s where I’d love to go afterwards.”

A recent study of Irish medicine graduates by the IMO found that 60 per cent of doctors planned to emigrate after their placement year working in the HSE.

The study also found that 45 per cent of doctors who graduated in 2011 no longer work in the Irish health service.