Sharing of information and data ongoing with UK, Government says 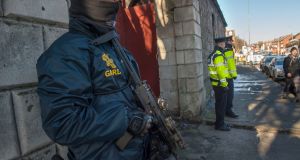 Senior Government figures have insisted Ireland is adequately prepared for the possibility of a terror attack.

Taoiseach Enda Kenny, Tánaiste Frances Fitzgerald and Minister for Housing Simon Coveney said gardaí have been given every resource available to assist them in the fight against terrorism.

Data and information sharing is also ongoing with the United Kingdom, the Government said.

Ms Fitzgerald met Garda Commissioner Nóirín O’Sullivan on Monday night to discuss the fact Rachid Redouane, one of the London attackers, was resident in Ireland for a number of years.

The Tánaiste said she was not in a position to reveal details surrounding Redouane’s stay in Ireland due to the ongoing investigation in the UK.

However, she stressed gardaí would release details at a later point but would not do anything to jeopardise the police work in the UK.

On Monday, Minister for Education Richard Bruton defended the Government’s response to a potential terror attack, saying “strong resources” are in place. He told RTÉ’s Morning Ireland that there is a need to respond to the changing nature of threats.

Mr Bruton declined to comment further on the investigation into the Dublin link to one of the London Bridge attackers.

“It is an ongoing live investigation. Every single lead will be tracked down.’

The Minister also said that he welcomed Leo Varadkar’s proposal of a COBRA style committee.

“The reality is that the threat is changing all the time and you have to change with them.”

When asked if An Garda Síochána should have an Arab speaker on the force, he said that if such a resource was needed then the Garda Siochana should get it.

Meanwhile, the Association of Garda Segreants and Inspectors (AGSI) has warned unarmed gardai are not being properly trained to deal with a terror threat.

Association president Antoinette Cunningham said the first officers on the scene in London last Saturday night were unarmed police, but that had received training and knew what to do.

“Our members have not been trained. There is a deficiency in our training. I’m not sure of our capability to deal with a terrorist attack,” she told RTE’s Today with Sean O’Rourke show.

Ms Cunningham called for a more integrated approach to training. “Clearly there is a gap.

“When everyone else is running away from an incident, we’re running towards it.”

On the issue of resources, she said that any resources were not ‘additional’ but had been diverted from elsewhere.

Ms Cunningham was particularly concerned about the reduction of community policing. “The decimation of these units is a grave error.”

When asked about the cultural outreach of the force, she said that the Racial, Intercultural and Diversity office was a huge success. “There has been progress, but we’re not yet where we need to be.”