Ex-partner of London attacker is 'deeply shocked' by his actions 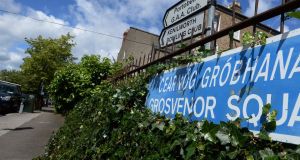 Charisse O’Leary, the ex-partner of London Bridge terrorist Rachid Redouane, has said she is “deeply shocked, saddened and numbed” by his actions.

“My thoughts and efforts now are with trying to bring up my daughter with the knowledge that someday I will have to try and explain to her why her father did what he did," she said

The British woman married the Isis attacker in Dublin in 2012 and they have one child.  They separated last year.

A number of library cards taken out by Mr Redouane at Dublin libraries are being reviewed in a bid to uncover more information about his life in Ireland.

The Irish Times understands the 30-year-old, one of three men shot dead by London police after last Saturday night’s stabbing attack in the city, took out a number of library cards in 2015.

At least one of the cards was for permanent membership of a library in Dublin’s inner city. A further two cards were temporary visitors cards, apparently taken out before the full membership.

While it may be impossible for the Garda to establish precisely where and when Redouane used Dublin libraries once he had a full membership card, his registering for it and also taking out temporary cards offers some pieces of valuable information.

Internet searches at the libraries on the dates he registered for the cards could now be checked in a bid to determine whether, for example, any extremist material was being viewed on those dates and perhaps who he was in touch with.

Records of such activity are not retained by internet service providers. Informed sources said whether internet activity on computers in a library could still retain records of activity as far back as 2015 may vary from computer to computer.

Under Ireland’s data retention laws, telephone records are kept for two years by the companies, while records of Internet searches are kept for a year. Records of WhatsApp engagements, and similar services are not stored at all.

Redouane, who lived in Ireland for a time and married his British wife here in 2012, had at least one account with a messaging app. He also had at least one Irish mobile phone, which is still active.

When the number is dialled, callers hear a one word greeting - “Rachid” - before the message minder activates to record the caller’s voice message.

In February 2015, Redouane took out a visitors card for Phibsboro library.

It would have allowed him to visit the library and use the internet services there.

Just days later he took out another visitor’s card, this time the Central Library in Dublin’s Ilac Centre. While library users are asked to include an email address and phone number, Redouane listed neither on the temporary card registration forms. He gave his home address as a flat in a house on 41, Finglas Road, Cabra, close to Glasnevin Cemetery.

He also had a full library membership card. It was taken out at the end of July, 2015. It was issued at Dolphin’s Barn library, Dublin 12.

That building, which is split into a number of flats, has since been sold to a new owner and it appears the owner in 2012 is now deceased.

When the property was sold it was vacant, meaning nobody who lived there in 2012, when Redouane and his new wife claimed to, are still living there.

It appears Redouane and his wife, a 38-year-old Caucasian British woman who never converted to Islam, moved back to UK some time in 2013.

However, it is still unclear precisely when they departed Dublin for London.

The couple lived in a council flat in a tower block in Dagenham, east London, after leaving Dublin. They are believed to have lived there, in Redouane’s wife’s parents’ flat, until the first half of last year.

In the early part of 2016, by which time they had a new baby girl, the couple moved out of that flat into another council property nearby.

That was followed by another move, to council accommodation in Barking, where Redouane’s wife was arrested early on Sunday.

However, the couple had split up last year and it appears Redouane’s wife and child made the move to the accommodation in Barking without him.

The Garda is still trying to confirm Redouane’s addresses while he lived in Dublin and indeed exactly when he was here.

His marriage certificate confirms his wedding took place on November 7th, 2012. Under law, any couple intending to marry in a registry office must give at least three months notice.

It means, if the rules were followed at the time, both Redouane and his wife would have given the Dublin registrar notice of their plans to marry at the very latest in the first week of August, 2012.

They then married in November of that year and left for London not long afterwards.

A number of British media reports based on speaking to people who knew the couple in London have questioned whether they ever lived in Ireland, either while single or as a couple, for a long period at any time.

However, aside from being in Dublin in the second half of 2012 and possibly for a period into 2013, they spent most of their time in London thereafter.

Gardaí believe that after moving back to London with his new wife after their 2012 Dublin marriage, Redouane definitely returned to Dublin in 2015.

He was with his wife, who appears to have fallen pregnant here, and they were in Dublin for around seven months in 2015. They then returned once more to London.

Gardaí believe Redouane may have spent some time in Dublin last year, though that remains unclear. On the basis of the evidence that has emerged so far, he does not appear to have lived in the Irish capital at any time this year. And senior Garda sources believe it was “a year or more” since he had been in Dublin.

However, he had access to an Irish-registered vehicle in London and he may have been able to enter Ireland in his car by ferry on a ticket purchased by somebody else.