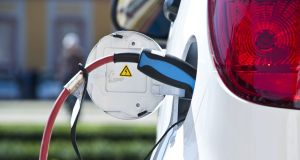 A total of €5.75 million was spent on Vehicle Registration Tax relief on electric cars in 2015, considerably down on figures achieved in 2007. Photograph: Getty Images

There has been a dramatic shift in environmental subsidies in Ireland over the past decade towards the generation of renewable energy and support of better energy efficiency, according to CSO figures.

The supports, however, are doing little to boost increased use of electric vehicles, one of the least-polluting forms of transport.

Massive environmental funding is allocated by the Government every year to businesses, households and public bodies. The latest data shows it amounted to €642 million in 2015.

The bulk of spending on was on subsidies and financial supports referred to as transfers for wastewater management (€184 million); protection of biodiversity and landscape (€133 million), protection of energy from renewable sources (€171 million) and programmes to save heat/energy and management (€90 million).

Most environmental transfers are paid by the Exchequer (85 per cent) with the remainder coming from the EU.

The environmental benefits from an increased public service obligation levy, charged on all electricity users to support the generation of electricity from sustainable, renewable and indigenous sources, has become evident since 2010.

The CSO figures released today confirm the levy raised €318 million in 2015 (up from €144 million in 2010), of which 48 per cent was used to fund renewable energy generation, 35 per cent on peat burning power generation and 17 per cent to help maintain the security of electricity supply.

In the past, the bulk of funds from this source were used to support electricity generation from peat, notably at power stations in the Midlands, which is classified as a subsidy that is “potentially environmentally damaging”.

Over the past 15 years, the amount spent on environmental protection – reducing pollution and other negative impacts on the environment – has decreased, while spending on preserving natural resources from overconsumption has increased, explains CSO statistician Clare O’Hara.

“This has coincided with the setting up of the Sustainable Energy Authority of Ireland,” she added, which accounts for a lot of the renewable spend including a broad range of programmes and grant schemes to improve energy efficiency, retrofitting of buildings, use of wind energy and electrical vehicles.

A total of €5.75 million was spent on Vehicle Registration Tax relief on electric cars in 2015, a modest increase on the previous four years, but considerably down on figures achieved in 2007 (€12.8m) and 2008 (€21.8m) when tax relief included hybrid vehicles. A total €8.4m was spent on supporting the use of electrical cars, including VRT and SEAI grants for the purchase of electrical vehicles – 476 private electric cars were registered for the first time in 2015, less than 1 per cent of vehicles sold.

The shift in emphasis on environmental spending by Government is confirmed by analysis of figures over the past 15 years which shows that “the agriculture, forestry and fishing sector, and the public services sector were the main beneficiaries,” Ms O’Hara said. “This was to encourage biodiversity-friendly farming (known as REPS), which is now terminated, and to fund local authorities in the development and operation of wastewater treatment facilities.”

In the 2008-2010 period, a peak in environmental spending was reached due to the Farm Waste Management Scheme, which was a capital grant programme aimed at helping farmers meet the requirements of the EU Nitrates Directive by investing in animal housing and storage facilities for silage and agricultural waste. In the past five years, the scale of support of renewable energy generation and energy efficiency sector has accelerated.