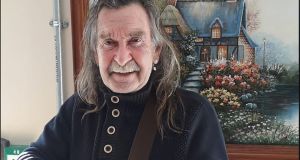 A 75-year-old man who died after he was struck by a reversing van in the car park of a sports ground in Cork city was a musician, poet and author who was “an inspiration to all he knew”.

Pete Newman, who was also known as Pete Duffy, died at the scene at College Corinthians in Donnybrook, Douglas, on Saturday shortly after 3.30pm.

People rushed to his assistance and gardaí and paramedics were on the scene within minutes.

But Mr Newman, who lived in nearby Hillcourt in Donnybrook with his family, was pronounced dead before he could be transferred to hospital.

Musician Ger O’Sullivan met Mr Newman at an open-mic event in Gallagher’s pub in Cork city a few years ago. He said Pete was a “a very talented songwriter, poet and storyteller”.

“He was an inspiration. Age was just a number to Pete. I used to joke with him and say ‘I want to be Pete when I grow up.’ His music and positivity will be sadly missed. He lived many lives in his life. He made us all smile.”

Mr Newman performed a number of gigs for charities and composed a special musical number for the the Mother Jones Festival.

He was also a great friend of Douglas Library and the Lantern Project which runs community education projects in Cork city.

Karina Healy, co-ordinator of the Lantern Project, said Pete “shared his gift of story and song” in their lunchtime concerts.

“He had a gift for lifting people’s spirits. We are deeply saddened to hear of his passing. We were very fond of Pete.”

College Corinthians also paid tribute to Mr Newman saying he was “loved and respected” by all there. They extended their deepest sympathy to the family of the deceased.

Mr Newman was also a frequent attendee at yoga classes in the Sacred Body Studio in Donnybrook. In a statement, the studio said he was a positive man who was “full of energy”.

“We lost a great person. Pete was an example of life. When he wasn’t training he was going to yoga, playing his guitar, singing or laughing with his dearest friends.”

Mr Newman grew up in Orrery Road off Cathedral Road in Cork city. A few years ago, he gave an interview to the Cork Folklore Project detailing his memories of life in Cork in the 1950s.

He enjoyed a long career as a musician initially with the Reptiles group and then as a solo artist. In 2013, he celebrated 50 years in show business by releasing an album of self-penned songs.

He performed material from the album as part of the Mother Jones Festival and took to the stage in 2018 at St Finbarr’s Cathedral in Cork as part of the Western Front Association’s “Evening of Remembrance Concert” to commemorate the Irish who died in the Great War.

‘Salt of the earth’

Historian Gerry White said he penned a beautiful song for the night which brought history to life.

“He struck a chord that night. He was a wonderful man. The salt of the earth.”

Festival and released CDs of his orated narratives.

He was also a short story writer and published his first collection, Old

Dog for the Hard Road, in 2014. He released a second collection entitled Pup for the Boreen.

Gardaí have appealed for witnesses to the incident at College Corinthians on Saturday. The driver of the van involved was uninjured but badly shaken. He had dropped his son off for a match and was leaving the car park when the event occurred.

Gardaí cordoned off the scene for a full forensic examination. The body of Mr Newman was removed to Cork University Hospital for a postmortem.

Gardaí are appealing to anyone who witnessed the accident to contact them at Angelsea Street Garda Station on 021-4522000, the Garda Confidential Line on 1800-666111 or through their local Garda station.