Garda checkpoints in operation in county, both along Border with North and neighbouring Leitrim 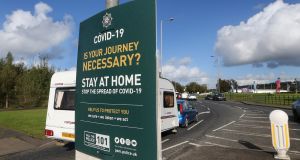 A caravan with a Northern registration being transported towards Strabane in Co Tyrone from the Border area of Lifford in Co Donegal on Friday. Photograph: Margaret McLaughlin

It is a sunny Sunday afternoon; perfect weather for a trip to Donegal.

Yet this weekend, the roads were noticeably quiet. At what is usually the busiest Border crossing, at Bridgend, there were few cars; on the way from Derry in Northern Ireland to Buncrana in the Republic, the pubs, restaurants and hotels that would usually be full of Sunday lunch trade had their doors closed, and their car parks empty.

In Buncrana, some have come to walk the seafront, or visit the playpark. “It’s definitely a lot quieter,” says Charlie Coyle, who mans the ice cream van every weekend. “You need a flow of people, but there’s nobody about.”

Two friends sit on a nearby bench overlooking the sea, takeaway coffee cups in hand. “Where else is there to go?” one asks.

From Sligo, but visiting family in Donegal, her friend admits: “I should have gone home on Friday. But I was so looking forward to this weekend. I haven’t been up here since June.

“I’ve been trying to be good and trying to do the right thing and minimising my social circle, because you don’t want to be taking it back home.”

Under the Level 3 restrictions, people must not enter or leave the county unless for work, education or other essential purposes. Garda checkpoints were in operation in the county at the weekend, both along with the Border with the North and with neighbouring Co Leitrim.

At the seafront, the majority of the cars have Donegal registration plates, though there are some from the North or the UK; a couple emerging from one such vehicle explain they are originally from Scotland, but came to their second home near Buncrana in February, and have stayed throughout lockdown.

Their golf club, they explain, has a large Northern membership; they have cancelled a tournament because so many are unable to travel. “People are being pretty responsible.”

“The message does seem to have got across,” says Sinn Féin TD Pádraig MacLochlainn, who is from Buncrana. “That goes both ways – people should not come over [into Donegal] unless it’s for an essential purpose, and Donegal people should not leave the county.

“In the early stages of lockdown there clearly was a problem, but this time the overwhelming majority are complying.”

Local resident Sean McKinney is less sure. “There are a lot of people coming down [from the North]...it’s the way life is here. We travel into Derry as much as Derry people travel here, so if it [the virus] is here it’s going to be in Derry.”

Tara Forrest is originally from Derry, but she and husband Ross now live in Donegal.

“People will still come across,” says Tara. “It’s like most people now, they’re just deciding themselves what is the best thing to do. People will still head to Derry to go shopping, or on a run to Donegal.

But, her husband says, the focus on the Border has created division. “I think it’s brought out the worst in people. They’re saying, ‘them Northerners’, ‘them Southerners’. That’s terrible.”