Blaze broke out on Wellington Street Upper near Broadstone 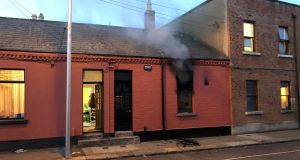 Dublin Fire Brigade is at the scene of a substantial house fire that broke out on Sunday evening on Wellington Street Upper in Dublin’s north inner city.

The house has sustained extensive damage, but no one was injured in the blaze and there was no requirement for any occupants to be transferred to hospital.

The fire service received a call in relation to the incident shortly before 7.30pm this evening and the blaze was already being brought under control by 7.40pm. The occupants of the house had already evacuated when fire fighters reached the scene.

Three fire tenders remain at the scene, but it is understood the blaze is under control and has not spread to surrounding houses. Other homes on the street of terraced houses near Blessington Basin in Phibsborough have been evacuated as a precaution.