Tributes paid to Lyra McKee on first anniversary of her murder

‘We must pray that those who killed Lyra will ... admit the truth of what they have done’ 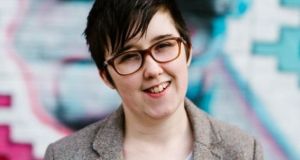 Ms McKee was shot dead on April 18th, 2019 as she was observing rioting in the city. The New IRA admitted the murder. File photograph: Jess Lowe/EPA.

Tributes have been paid to Lyra McKee, the journalist who was murdered in Derry last year, on the first anniversary of her death.

Ms McKee was shot dead on April 18th, 2019 as she was observing rioting in the city. The New IRA admitted the murder.

Dunja Mijatovic, the European Commissioner for Human Rights, called on Saturday for the authorities to “bring the perpetrators to justice” and to protect journalists, especially those covering organised crime, paramilitary activities and legacy issues, from “threats in Northern Ireland”.

The PSNI detective leading the murder investigation this week wrote to residents in the Creggan, the area of Derry in which Ms McKee was shot asking for community help in convicting her killers.

The National Union of Journalists (NUJ) held a virtual commemoration for the 29-year-old at 11am on Saturday, during which journalists, politicians and activists shared photos and memories of Ms McKee under the hashtag #WeStandWithLyra.

Séamus Dooley, Irish secretary of the NUJ, said Ms McKee had “an unrivalled zest for life and for living”.

“ That is what makes her senseless killing so cruel. In her journalism she combined her passion for journalism with a deep commitment to social change,” Mr Dooley said.

“In her writings, in her approach to issues of poverty, equality and exclusion Lyra was not afraid to ask the difficult question, to challenge the conventional and accepted wisdoms and to look for new and imaginative solutions to problems. That’s her legacy.”

He added that what marked Ms McKee apart was “her optimism, her unfailing good humour and her refusal to become cynical while fearlessly questioning the status quo”.

Here NI, a charity in Northern Ireland supporting lesbian and bisexual women, also paid tribute to the journalist, adding that its members were thinking of her partner Sara Canning, her family and friends.

“We are also remembering our own relationships with Lyra. We miss you, but we’re still hanging in, kid,” a statement from Here NI said.

Ellen Murray, executive director of Transgender NI, said she could “only imagine” the conversations she would be having with Ms McKee about what is going on in the world today.

“A year ago today, my dear friend Lyra McKee was murdered in her prime in the city she lived in and loved. Not a day has passed where I haven’t thought about her. I miss you so much, pal,” she said.

“Express gratitude for her giftedness, solidarity with her loved ones, support

[The PSNI] in bringing her killers to justice. May Lyra always inspire journalists to dig for truth,” he said.

A special Mass to commemorate Ms McKee was offered on Saturday evening in St Mary’s Chapel in Creggan by the parish priest who anointed her, Fr Joe Gormley.

The Mass, which was also in memory of Ms McKee’s mother, Joan Lawrie, who died last month, was held at 6.30pm while the bells rang at 8.30pm.

Bells also rung in her native city of Belfast on Saturday to mark the anniversary.

Speaking at the Mass, Fr Gormley said he had not know Lyra personally. However, over the past year he had learned from her family and friends that if she had survived she would have wanted to meet the people behind her death. “This would not absolve them from their legal and moral responsibilities, rather it would be to help them to see that when they may have met these responsibilities their lives could be a source of mercy and healing,” he said.

“We must pray that those who killed Lyra will be touched by the mercy of God to admit the truth of what they have done,” he added.

The Mass was celebrated in a near empty church due to coronavirus restrictions. The readings were delivered by RTÉ’s Tommie Gorman.