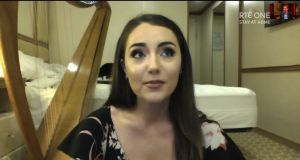 An Irish musician has told of her struggle and feeling of being “forgotten” whilst stuck in her cabin aboard the Ruby Princess Cruise Ship in Sydney since the outbreak of Covid-19.

Kate Heneghan (24), from Castlebar in Co Mayo, has been stuck on the cruise ship just outside Sydney for the past 28 days. There are five Irish people still on the ship, four members of the band Emerald Tide and an engineer.

The passengers of the cruise ship got word on March 16th that the prime minister of New Zealand was closing the ports and no longer allowing ships to enter the country, which resulted in the ship making a three-day voyage back to Sydney, where 2,700 passengers disembarked on March 19th.

“On March 20th, we got word that there were positive cases on board, so we were quarantined and isolated here then on March 21st,” Ms Heneghan said on the Late Late Show on Friday night.

The Ruby Princess cruise ship, owned by Carnival Corp, has been docked at Port Kembla in New South Wales since and has been linked to hundreds of confirmed Covid-19 cases in Australia and about a third of the country’s reported deaths.

The violinist and harpist described her situation as a “huge scandal”. Speaking to the talk show host Ryan Tubridy, Ms Heneghan said her contract as a musician aboard the cruise ship was due to finish on April 4th, but she remains unaware to date of when she and the other band members will be allowed to disembark from the ship.

“It’s a big political game of chess at the moment,” Ms Heneghan told Mr Tubridy, regarding the police investigation into whether there was criminal negligence in the handling of the health issues on the cruise ship.

“We’re just pawns in this big political game and kind of forgotten about until decisions are made and we get news that we can disembark and get repatriated home.”

“We were told via intercom by the hotel general manager, who updates us daily, that there was a possibility of us going to Manila to let off the Filipino crew. One of our sister ships is outside Manila and the Philippines won’t let them port. We also heard through the media that we might be going to the United States, which would be disastrous for us because we don’t have visas,” she said.

Ms Heneghan told Mr Tubridy that her “one wish” for the four Irish in her band and the fifth Irish citizen on board is “to get off this boat before it sails away”.

Despite the situation, the young woman was in good spirits and said “structure and routine” have been “absolutely vital in maintaining a bit of sanity”. Ms Heneghan spends her days doing yoga, practicing her instruments, watching Netflix and staying in contact with friends and family.