Coronavirus: 100,000 care home staff and residents to be tested

Plan to be enacted within 10 days, with full census of deaths in facilities since January 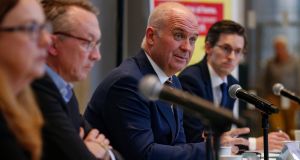 “The behaviour of the virus among vulnerable groups who live in these care settings continues to be a concern and this remains a priority for NPHET,” says chief medical officer Dr Tony Holohan. Photograph: Crispin Rodwell

Up to 100,000 staff and residents of long-term residential care facilities are to be urgently tested for Covid-19 in an effort to bring the disease under control among vulnerable groups.

The testing blitz will take place over the next seven to 10 days, the National Public Health Emergency Team announced on Friday evening.

A census of deaths across all these facilities is to be carried out this weekend, covering all Covid-19 and non-Covid-19 deaths since the start of the year, regardless of how the deaths occurred, NPHET also announced.

The census has been called following persistent concerns over the possible under-reporting of coronavirus deaths, particularly among older people in nursing homes.

Deaths in residential care facilities account for more than half of all coronavirus deaths reported so far, with the deaths of large numbers of vulnerable patients in centres in Portlaoise and Dublin being revealed in recent days.

“The behaviour of the virus among vulnerable groups who live in these care settings continues to be a concern and this remains a priority for NPHET,” chief medical officer Dr Tony Holohan told a briefing .

Another 44 deaths of people diagnosed with Covid-19 were reported by NPHET, the highest daily total so far and an increase of one on the previous day’s total.

However, this daily figure may include deaths occurring over a number of days but reported on the same day. Dr Holohan clarified that April 7th, when 39 people died, marked the peak for deaths.

Additionally, 709 new cases of the virus have been confirmed, bringing the total number in the Republic to 13,980.

Asked about the flying-in of almost 200 Bulgarian fruit-pickers to Dublin by strawberry producer Keelings, Dr Holohan said he was “not comfortable” with the company’s action.

Keelings say the fruit-pickers were screened by doctors before they travelled and would spend 14 days in quarantine before working.

However, Dr Holohan said he was not aware of the event and it was not consistent with public health advice.

In a statement on Friday night, Taoiseach Leo Varadkar said he “shares the discomfort” expressed by Dr Holohan.

“I have therefore asked for an urgent review of the current rules and procedures to be carried out over the weekend,” he said. “That review will be considered by the Cabinet Committee on Covid-19 on Monday and any changes that are necessary in light of that review will be made.”

Public health officials also decided at their meeting on Friday to expand overall testing capacity to 100,000 tests a week, operating on a seven-day-a-week basis, for a minimum of six months.

The target, broadly similar to previous promises to ramp up testing to 15,000 tests a day, urgently needs to be met before any easing of Government restrictions can be contemplated. Dr Holohan said the increase in testing would happen “as soon as possible”.

Towards the end of next week, the case definition used to identify people with the virus will be changed to help pick up more cases of the disease, Dr Holohan added.

The supply of personal protective equipment (PPE) for healthcare workers was “perilous” last weekend but this issue has since been resolved with the arrival of “multiple” planeloads of PPE from China, each containing 30 million items, according to Health Service Executive chief clinical officer Dr Colm Henry.

Some concerns remained about the supply of respiratory masks, he said.

There are about 30,000 staff and 28,000 residents in nursing homes, while there are also about 11,000 beds in residential mental health units and disability centres.

Covid-19 is present in almost 30 per cent of nursing homes. There are currently 335 outbreaks in residential care facilities, of which 188 are in centres operated by private providers and 112 in HSE facilities. Another 28 are in centres run by section 38/39 organisations and funded largely by the HSE.

Of the total number of outbreaks, 196 are in nursing homes, though another 49 involve centres where older people are resident.

Meanwhile, the number of coronavirus deaths in Northern Ireland is at least one-third higher than previously reported, it was confirmed on Friday. Most of the additional recorded deaths took place in care homes and hospices.