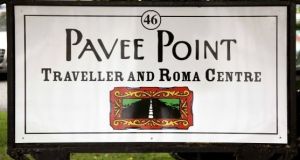 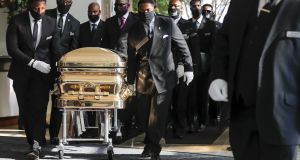 Pallbearers bring the casket into church for the funeral of George Floyd at The Fountain of Praise church in Houston, Texas, on Tuesday. Photograph: Godofredo A Vásquez/Getty

Traveller organisations have issued a joint call to “end racism” on the day George Floyd was being buried in Houston, Texas.

Some 10 Traveller organisations issued a statement on Tuesday night saying the time for action on racism “is now”, given the death in US police custody of Mr Floyd, a black man, and following on from “ the ongoing responses of his country’s leadership”.

The organisations, including Pavee Point Traveller & Roma Centre and others concerned with mental and physical wellbeing, expressed sympathy and solidarity with the family of Mr Floyd.

They expressed support for the African-American community, who the statement said were voicing their determination that racism embedded in colonialism and slavery had to be “once and for all addressed in their country”.

The Travellers said: “We stand in solidarity with all people of African descent and the anger they feel at this time and with the efforts of Black Lives Matter and other groups, including those here in Ireland, to name and address this racism.”

As Travellers, the groups said, their members have for long been exposed to anti-Traveller racism in Ireland and elsewhere.

“We call on the incoming government to act immediately to address the discriminations, including structural racism, experienced by Black communities here, and by many others including Travellers and Roma.”