‘Brisk’ sales as fears about trying on clothes fade

Unexpected bounce in men measuring up for winter wedding suits 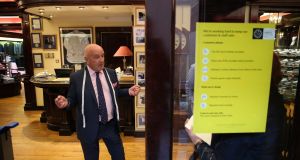 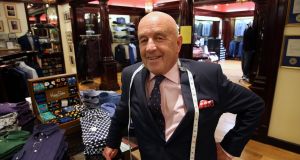 Louis Copeland had 10 couples measuring up for winter weddings at his Capel Street shop in the first two days of trading. Photograph: Nick Bradshaw

People have been returning to shops across the country with a mixture of enthusiasm and caution, and there has been an unexpected bounce in men measuring up for winter wedding suits, retailers have said.

Retailers have reported “brisk” sales in the early stages of the reopening as fears that shoppers may have been reluctant to leave their homes or touch or try on clothes have diminished.

Louis Copeland, of the eponymously named men’s clothes retailer, said shoppers had “started to trickle back” with most of those coming through the doors buying casual wear.

“I think it will be a couple of weeks before people start to buy suits because so many people are working from home.”

He said when he went back to work on Monday morning, it was the first day he had put a suit on in months. “It felt like it was my first day back at school.”

A surprising trend Mr Copeland has noticed in the first two days of trading was men coming in looking to be measured for wedding suits.

“I am hearing that people are bringing their big day forward and planning to have smaller weddings in the middle of the week in October or November.”

He said he already had 10 couples through the doors to measure up for winter weddings.

“Apart from anything else it gives them a great excuse not to invite in-laws or people they don’t really like if the weddings are held in the winter when restrictions are still in place.”

According to Jean McCabe who owns the Willow clothes shop which has branches in Galway and Ennis: “People have been out and about and the ones who are in town are spending money.

“They are picking up summer pieces after realising what the gaps were during the good weather,” she said.

She said none of the people who had come into her shops had any issues with browsing the racks or trying on clothes.

He said there had been “brisk sales in the early stages of the reopening” and staff were “delighted to be back and the customers seem delighted to see them”.

The main focus of shoppers’ attention on Monday and Tuesday were “T-shirts, shorts, capris, sun dresses and sandals”, he said.

“What we are hearing from a lot of customers is that they are out to treat themselves after being locked down at home for so long. There wasn’t as much nervousness as we expected.”

He said one thing that had surprised him was how keen people were to use the fitting rooms.

“I thought there might be an issue but a lot of customers did want to try clothes on. And we were happy to facilitate that. I would say that about half of our customers were using the changing rooms.”

Like many retailers, Pamela Scott has new sanitation protocols in place which sees clothes that have been tried on but not bought steamed and quarantined.