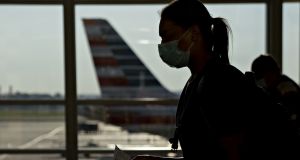 In the Republic, all travellers arriving from outside the island must fill out a paper form and are asked to self-isolate for 14 days. Photograph: Andrew Harrer/Bloomberg

The Northern Ireland Executive wants information panels installed in ports and airports to inform arriving residents they must provide the UK government with their contact details during the required 14-day isolation period.

The North’s health minister, Robin Swann, also said the Executive would “mutually respect and support” the Irish Government in regard to Republic of Ireland residents returning via ports and airports in Northern Ireland.

Since Monday, anyone arriving into Northern Ireland from outside the Common Travel Area has been required to self-isolate for 14 days and to provide their contact details to the UK government using an electronic form. Breaches are punishable by a fine of up to £1,000.

In the Republic, all travellers arriving from outside the island must fill out a paper form and are asked to self-isolate for 14 days. Northern Ireland residents only fill out a portion of the form, and do not have to provide their contact information.

Speaking following a meeting of the Northern Executive and their Irish counterparts on Tuesday, Mr Swann said the conversation between the jurisdictions was “ongoing”, though he had hoped it would have been concluded by the beginning of the week.

This discussion, he said, was around erecting, “the same way we did at the beginning [of the pandemic], mutual signage in each other’s airports and ports so it’s very clear, no matter who’s arriving from what other country, that they are aware that the restrictions and the regulations they are under is actually that of their place of residence, not their port of arrival.

This eliminates the so-called “Dublin loophole”, by which people from Northern Ireland arriving from abroad might have avoided the self-isolation period by travelling through the Republic. However it is not clear how it will be enforced.

Similarly, concerns remain over the “Belfast loophole”, whereby people can travel from Great Britain to Northern Ireland without the need for self-isolation and might then cross the border into the Republic.

In a statement to The Irish Times, a spokeswoman for the Department of Health in Dublin said discussions were “ongoing” across government “in relation to introducing mandatory quarantine and as part of this there is close ongoing engagement with NI colleagues.

“Information has already been and will be shared in the case of contact tracing passengers from a possible case on a flight or a ferry,” she said.

Daniel Holder, of the Belfast-based human rights organisation the Committee on the Administration of Justice (CAJ) had raised concerns that people returning to Northern Ireland via the Republic could unwittingly be committing a criminal offence for failing to complete the UK Passenger Locator Form.

“That’s easy if you land into a Belfast airport,” he said. “If you land into Dublin airport you might not even know about the UK form, and there is no one to hand it over to anyway when you cross the land border. But you could still be committing a criminal offence for not doing so.”

He also said that under the current regulations in Northern Ireland, someone who landed in Dublin and then travelled home to Donegal “may be captured by a requirement to self-isolate in the north when crossing the border on the way home.

“We need the Northern Ireland Department of Health to both provide clarity and to revise them to remedy these issues,” he said.