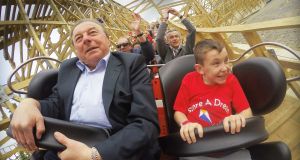 The operators of Tayto Park – Ireland’s only combined theme park and zoo – have postponed the reopening of the park, which which had been announced for June 18th next.

The Co Meath-based attraction announced on Wednesday morning that the park would admit visitors from June 18th. Such was the response, however, that its booking system was immediately overwhelmed and crashed.

Ray Coyle, former owner of Tayto and developer of Tayto Park, said the management team had been “excited to reopen” the facility, as it believed it was entitled to do, having consulted the regulatory authorities over the past few days.

But he said he was now “ terribly sorry, having reviewed the latest Government guidance for the roadmap to reopening Ireland, that it had become apparent the June 18th reopening could not take place”.

Mr Coyle said that on reviewing statutory regulations “that were published late yesterday evening , is with regret that Tayto Park will have to remain closed until regulations permit us to reopen”.

Tayto Park has rapidly expanded over the last decade and is now one of the State’s premier attractions, incorporating the Cú Chulainn rollercoaster, a Viking village and circus and a zoo.

Mr Coyle said he apologised to those who did manage to book tickets for June 18th, and said they will be reimbursed in full. A new date for when Tayto Park can reopen is being ascertained.

“We apologise to all of guests and members for this inconvenience. We look forward to welcoming you back to Tayto Park in the near future. We also appreciate the immediate support we received from the media. We promise that Tayto Park will be worth the wait,”Mr Coyle said.