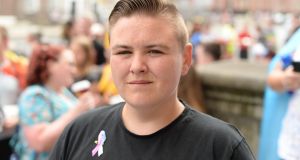 Noah Halpin pictured in Dublin in 2018 at a protest for access to healthcare for transgender people. Photograph: Dara Mac Dónaill

Members of the transgender community and their supporters plan to protest outside RTÉ studios in Dublin on Tuesday evening over the broadcast of a pre-recorded interview with Father Ted writer Graham Linehan.

He has accused some activists supporting transgender people of holding an “extreme, misogynist ideology”.

Prime Time has recorded an interview with Linehan as part of a programme on transgender issues. An online petition urging it not to run the piece has gained over 5,000 signatures.

The petition reads: “Graham Linehan is not a medical expert and he is not transgender. He has frequently expressed transphobic views in public and has used his social media platform to denigrate transgender people.”

Linehan has defended his views and said he is not transphobic.

RTÉ has said it hopes viewers “will find the programme a fair and responsible examination of an issue of considerable public importance”.

Aoife Martin, a transgender woman, said it was “regrettable” that Linehan had been given a platform to speak about transgender issues in Ireland.

“Mr Linehan has no expertise in this area, being neither trans nor belonging to the medical profession,” she said.

“Thanks to people like him and a willing media, the level of public discourse in the UK can only be described as toxic. We do not need such a ‘debate’ here.

“Ireland is, by and large, accepting of trans people thanks to the work of TENI (Transgender Equality Network Ireland) and community-based organisations. The trans community is an already vulnerable minority and the airing of such views as held by Mr Linehan will only increase that vulnerability.”

Chair of TENI Sara R Philips said she was pleased to be asked to contribute to the programme on gender recognition and young transgender people which will air on RTÉ on Tuesday evening.

“As chair of Transgender Equality Network Ireland I am proud of what has been achieved by Ireland’s trans community in advocating for our rights.

“The focus of tonight’s programme is a serious and sensitive topic and relates to the lived experience of many young trans people and their families,” she said.

“It is, therefore, critically important that contributions to the discussion are knowledgeable, nuanced and above all, respectful of trans people and their experiences.

“As such, the reaction of the trans community to the inclusion of contributors who have been vocally disparaging of trans people and who have no direct knowledge or expertise in this area is entirely understandable and should be listened to.”

Noah Halpin of the This Is Me Transgender Healthcare Campaign said Linehan had “no formal education, experience or expertise relating to trans identities” and that he was spreading a “highly damaging, transphobic narrative”. He said the feeling among the transgender community was one of “fear”.

“We fear that our recent progress in acceptance and understanding will be hindered and reversed and we fear that a public figure’s ideologies will inadvertently give others permission to see us as he does, allowing for an increase in transphobia in both a verbal and physical form,” Mr Halpin said.

“No one is more expert in trans lives than trans people. This conversation must include trans people and those with educated experience in subjects relating to trans identities and this is whom Prime Time should be featuring to ensure complete accuracy of the information being shared to the general public,” he added.

Benji Foley, a transgender man from Dublin, said he was “absolutely outraged and disgusted that Graham Linehan has been given this platform to discuss his wildly uneducated and ignorant views on the transgender community”.

He said Linehan had made a “brand” out of actively campaigning against the transgender community “in the name of ‘women’s rights’”.

“In my opinion he’s contributed vastly to the growing climate of transphobia in the UK,” he said.

“We do not want nor need that kind of toxicity here, and that is the only purpose his appearance will serve. He has no business appearing on a state-funded programme to discuss his unfounded views. He is not a medical expert. He is not a transgender person. He’s obsessed with speaking for women despite not being one.”

Benji said there was “absolutely no reason” to have Linehan on the show, other than for “free publicity”.

The writer was given a verbal harassment warning by British police after being reported by a transgender activist over social media comments in October last year.

Linehan told The Irish Times: “I don’t think I’m saying anything controversial. My position is that anyone suffering from gender dysphoria needs to be helped and supported.”