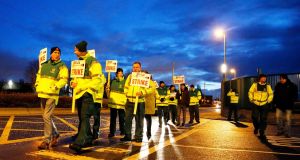 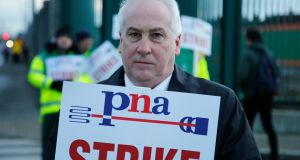 Up to 500 ambulance service staff are striking in a dispute over trade union representation rights and the deduction of union subscriptions at source.

The strike by members of the National Ambulance Service Representative Association (Nasra) runs from 7am until 5pm on Tuesday. Members of Nasra will only deal with calls in relation to life-threatening and potentially life-threatening cases during the planned stoppage. The Government has deployed Defence Forces ambulances and personnel to provide services for patients during Tuesday’s strike.

Nasra is a branch of the Psychiatric Nurses Association (PNA). However, the PNA has said the HSE has refused to recognises it as a representative body for members in the National Ambulance Service.

The general secretary of the PNA, Peter Hughes, says his members are looking for the “fundamental right to be represented by a union of their choice” and he called on the Minister for Health Simon Harris to intervene in the dispute.

Speaking on RTÉ’s Morning Ireland on Tuesday he said Mr Harris should tell the HSE to engage in talks with the PNA under the auspices of the Workplace Relations Commission.

Mr Hughes warned that if the dispute was not resolved there could be further strikes in the weeks ahead.

“Our members are looking for the fundamental right to join the union of their choice, and be represented by that union. Nasra which is a branch of the PNA was established nine years ago, the membership was growing year on year, however, the HSE are refusing to allow our members be represented,” he said.

“I don’t think there should be a monopoly on what members can be represented by any union and the psychiatric nurses have a 40 year history of representing members within the health services.

“Our members, if there’s an individual issue, whether that be a trust and care, dignity at work or disciplinary are receiving letters to state that they can only be represented by one union and there is no mention of any other unions and that union is Siptu.

“We have 500 members which equates to almost 50 per cent of the front line ambulance personnel and they’re being denied representation.”

Mr Hughes said it is not an issue of the PNA versus Siptu, but the HSE and PNA. “The people who joined the PNA were not happy with the representation they were getting, hence they joined the PNA, but the HSE’s response to this has been unbelievable to say the least.”

Mr Hughes said “the HSE have not engaged with us whatsoever, a legal firm is the only correspondence we have received and we’re receiving lots of correspondence and I think it’s something that needs to be questioned by the Public Accounts Commission about the HSE are spending their funds.”

On Monday, the HSE said the National Ambulance Service recognised the trade unions Siptu, Unite and Fórsa as representatives for its staff. It said that in particular Siptu was the recognised trade union for frontline personnel.

“Recognition of other associations or unions would undermine the positive engagement that exists and would impair good industrial relations in the National Ambulance Service.

“The principle of engaging only with recognised trade unions has been acknowledged previously by the Labour Court in a dispute involving the PNA and a different public-sector employer. With this in mind, National Ambulance Service will stand by the agreements that it has made with recognised unions and will not undermine those agreements by engaging with other associations or unions.”

The HSE said said Siptu expected most of its members to work as normal, and that the PNA had confirmed it would not be calling upon members of other unions to participate in the strike.

The HSE also said managers who were qualified paramedics would be carrying out frontline duties.“The Department of Defence has made a number of crewed ambulances available for tomorrow.” It said the PNA had confirmed that emergency cover would be provided where necessary.

However in Cork, some 20 members of Nasra, including paramedics and advanced paramedics began picketing the main HSE ambulance base in Cork at 7am this morning with the majority of their Siptu colleagues reportedly opting not to pass the picket.

Speaking on the picket line at the Kinsale Road HSE ambulance base on Cork’s southside, Nasra representative David Walker said the HSE’s refusal to give Nasra, as part of the PNA, representative and negotiation rights had left members with little choice but to begin industrial action.

“HSE management say that they are happy with representation provided by Siptu and Unite and they are refusing to give us representatives. It’s gone to the Workplace Relations Commission and the HSE got an invite to attend and they didn’t respond to it,” he said.

Mr Walker said that there are approximately 150 ambulance personnel in Cork city and county comprising paramedics, advanced paramedics and emergency medical technicians, of which 80 are represented by the Nasra and all of them are participating into today’s industrial action.

“Mr Walker said about 50 staff are based at the Kinsale Road site with the remainder stationed at another 12 bases around the county.

Among the other bases around the county where Nasra members mounted pickets were Castletownbere, Skibbereen, Dunmanway, Macroom, Midleton and Youghal with reports that Siptu members were not passing the Nasra pickets in many instances.

“It seems to be the trend around the country and here in Cork too that our Siptu colleagues have not crossed the picket so it’s resulted in a situation here where, as far as we know, there is only one ambulance on duty in Cork city today as opposed to normally up to nine,” said Mr Walker.