Former taoiseach warns of growth of populism during speech in Cambodia 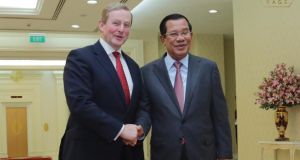 Populism grows when governments fail to engage with the “middle people,” the former Taoiseach, Enda Kenny, told an audience in Cambodia recently.

Addressing students in the University of Cambodia, in the presence of the Cambodian prime minister, Hun Sen, Mr Kenny said that when Ireland was hit with its financial crisis, he cut the salaries of government ministers, “took away their State cars, took away their drivers, took away all the perks of office.”

Minister were told that, “if you want to serve in the government, you are going to have to get down to the level that everyone else is contending with.”

The comment was met by applause from his audience, the only such interruption during his address.

Mr Kenny said his government introduced drastic pay cuts for public servants and set itself a challenge to create 100,000 jobs that would generate income tax that would fund services for everyone.

Asked about the elections to the European Parliament due to take place later this year, Mr Kenny said populist politicians are saying on social media and elsewhere, “vote for me and you won’t have to pay anything”.

In Greece, over three elections, opposition parties said “elect us and the EU will wipe out our national debt, but there wasn’t a single euro written off.”

If governments do not listen to the centre and engage with the “middle people”, then that ground gets “hollowed out” and people drift to the right and the left, either through anger or fear.

Populists say you can sort out a country’s problems just by taxing wealthy people but it doesn’t work out that way in reality, he said.

Mr Kenny’s visit co-incided with tensions between the EU and Cambodia. Mr Sen’s party won a parliamentary landslide last year after the opposition party was banned and the EU is reviewing its trade relationship with Cambodia as a result.

Mr Sen has been prime minister since 1985, making him one of the longest-serving political leaders in the world.

In a posting on his Facebook page, Mr Sen thanked Mr Kenny for his visit and said the EU was trying to hold the Cambodian people “hostage”.

He referred to how in the past the United Nations had supported the Kymer Rouge regime, which “massacred millions of Cambodians”.

The real challenge for every government, Mr Kenny said during his address, was to “liberate its young people”.

He said the problems facing the world could only be solved by nations working together in groupings such as the EU and the Association of Southeast Asian Nations (Asean).

The EU was like a “large coalition” government and you needed to know what pressures other countries were under.

“If the President of Lithuania says to you I want you to understand that the Russians were three kilometres from my border yesterday with five thousand tanks, and they weren’t there for show,” you need to pay attention to such pressures, he said.

Mr Kenny said there was a “very different” president in the United States and this was having a global impact.

1 Spread of coronavirus triggers European travel curbs
2 Why Sinn Féin will not call the State by its name
3 Anti-social chants bringing sour note to schools rugby
4 What evidence is there that the IRA still controls Sinn Féin?
5 Martin and Varadkar to hold exploratory talks on possible coalition
Real news has value SUBSCRIBE