Big increase in heroin addiction in Cork and Kerry 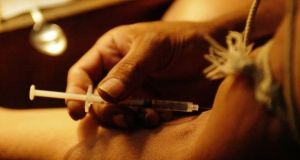 Two biohazard bins have been provided in Cork for heroin users to dispose of their needles and drug-taking equipment.

The number of people seeking treatment for heroin use in Cork and Kerry has soared over the last decade, a leading expert in drug addiction has revealed.

Numbers seeking treatment for cocaine have also grown, particularly since the economic upturn.

David Lane of the Cork Local Drugs and Alcohol Task Force said that drug addiction treatment services were now providing services to some 500 heroin addicts in Cork and Kerry, up from around 100 in 2008.

Some 80 per cent, or approximately 400, of these are in Cork city and county with 20 per cent, or around 100, in Kerry, but the service had noted there had been no great increase in recent months and those availing of the service were primarily older users with few under 25 abusing heroin.

He was speaking at Cork City Hall where he addressed a Cork City Council Joint Policing Committee meeting on Monday.

Mr Lane said the Cork Local Drugs and Alcohol Task Force, which has a staff of 60, currently has one outreach worker working with heroin addicts on a needle exchange programme but he was confident that they would have a second in place in Cork city before the summer.

He said that the service was currently providing two biohazard bins in Cork for heroin users to dispose of their needles and drug-taking equipment but he believed that they needed to increase this to four or five and on occasion swap their locations as drug users change where they inject their heroin.

“We do not see injecting drug use taking place in very public places, not in residential area and in areas where people can see this happening. The biohazard bins will be used for a certain period of time but then the problem will move on to another area and we need to follow it,” he said.

Mr Lane said the task force had also noticed an increase in more recent years in the numbers seeking assistance for cocaine addiction.

“There are more people presenting to us with problems of cocaine. People have more disposal income, it does recollect that type of economic culture which does emerge when the economy is doing well,” he added.

Mr Lane said that trends in drugs use can change over time. The closure of head shops saw a move away from psychoactive drug use. While alcohol continued to prove the primary addiction for many of the 1,500 the services deals with in Cork, many are receiving treatment for poly-drug use.

“The vast majority of people coming to us looking for help are poly-addicted so you are not just talking about a single substance but a variety of substances. People who have problems with over the counter medications and prescription drugs as well would feature in about 10 per cent of cases coming to us.”

Mr Lane said that the problem of people becoming addicted to prescription drugs and over-the-counter medicines were higher among certain cohorts such as the homeless, for whom alcohol addiction was also a huge issue along with mental health issues.