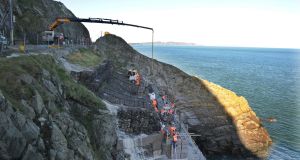 Irish Rail said the works on Bray Head are designed to protect the railway line between Bray and Greystones.

Train services were disrupted over the weekend as Irish Rail carried out major works on the line, including coastal defence works on Bray Head.

The works affected southside Dart services and the Athenry to Galway route on Saturday and Sunday. Elsewhere, track renewal works in Newbridge affected services to and from Heuston.

The coastal defence works at Bray Head meant there were no Dart services between Bray and Greystones, which will also be suspended on Monday as the works continue.

Irish Rail spokesman Barry Kenny said the works on Bray Head are designed to protect the railway line between Bray and Greystones.

Further disruptions can be expected on the bank holiday Monday while works on the line between Greystones and Bray continue.

The structure is composed of tiered gabion baskets, a mass concrete wall, and lower level masonry wall. It is located below track level and overlooks the Irish Sea.

The structure has deformed over time, leading to a prominent depression in the gabion baskets and concrete wall, and requires renewal to maintain protection of the railway line.

The works this weekend and over a further weekend in mid-November involve the mobilisation and operation of a crane, installation of precast concrete units and gabion baskets.

Works will also involve the installation of mini piles, sheet piles and rock anchors. Other works such as the construction of mass concrete walls, excavation and backfilling are also included.

All works must be undertaken in a coastal location which is accessible only via the railway line, which is the reason for the line closure this weekend.