Woman raped by stepfather from age 10 says State abandoned her 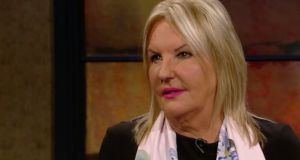 Mary Manning was raped and repeatedly beaten by her step-father Sean McDarby.

A woman who was raped for years by her stepfather for years from the age of 10, leading to the birth of five of her children, has spoken about how she felt abandoned by the State after the man’s crimes went unpunished.

Mary Manning was raped and repeatedly beaten by Sean McDarby from Co Carlow for more than 10 years beginning in the early mid 1970s and only after years of mental, physical and sexual abuse was she able to escape and make a new life for herself and her children.

She and two of her daughters, Iseult and Ashley appeared on the Late Late Show on RTÉ One television on Friday night to tell their story.

Ms Manning’s father died when she was nine years old and her mother remarried McDarby when her daughter was 10. She told host Ryan Tubridy that he started grooming her within months of moving into the family home after which the sexual assaults began.

Her stepfather than moved her to a “house of terror” in Dublin and by the time she was 22 she had four children under the age of six.

She fled to the US in 1987 but returned to Ireland after seven months after her children had been taken into care. The abuse continued and she had a fifth child before she eventually managed to break out of the abusive relationship

She said she had reported the man to the authorities first in 1988 and again 1994 but he was never prosecuted.

Ms Manning, who now works as a psychotherapist, said she had managed to cope with years of horrific abuse with the support of her husband Karl and her “beautiful daughters”.

Asked by Tubridy how she felt when her abuser died she said it was “such a mixture, it was like, he destroyed so many lives and has impacted so many lives. The really difficult piece is, while I absolutely love my children, he took away my ability to be a mother, he took away so much.”

She said there were times “when I see a resemblance...it’s difficult.”

Speaking about her relationship with her biological father, Iseult said she could not describe it in those terms.

“I would say it was a dependency. He had control, he came into the house, we were very silent and very afraid, she would lock the door and she would try and get away from him. He was just so abusive. We seen her being beaten by him... I think he had no boundaries to the level of sickness that he had in him.”

“If the State had intervened, he would be in prison,” she said.