Men tied-up in armed raid on home of business owners 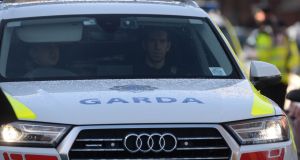 Gardaí have sealed-off the house and are awaiting forensic officers to carry out an investigation. Photograph: Alan Betson / The Irish Times

Gardaí have are searching for a gang who carried out an armed raid on a house in Co Donegal last night.

The raid happened at the home of business bowners in Malin yesterday evening.

The couple, who own the house at Beaugh, Malin were at a wedding when the gang raided their home.

The couple’s two sons were in the house and the armed and masked gang tied them up.

They escaped with an undisclosed sum of money.

The young men were not injured but were left terrified after their ordeal. The family whose home was raided are very well known in the area and operate a fish processing business nearby.

Gardaí have sealed off the house and are awaiting forensic officers to carry out a full investigation.

Gardaí have not yet released details of the raid.

However, local people are shocked by the raid in the normally quiet village on the Inishowen Peninsula.

One woman who knows the family said: “They are such a lovely couple and a lot of locals were at the wedding.

“One of the sons lives away but he must have been home for holidays or the weekend.

“It’s an awful thing to happen and they must have been terrified.

“Thankfully, nobody was hurt.”