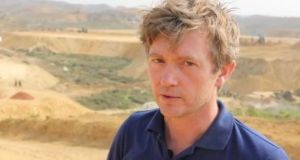 The remains of the late Co Clare engineer Micheál (Mick) Ryan, who was killed when Ethiopian Airlines flight ET302 crashed in March, are to arrive in Ireland this week ahead of his burial in Ennistymon.

Mr Ryan’s remains are due to arrive in Dublin airport on Tuesday after they were positively identified from the wreckage using DNA testing. They will be transported to Co Clare on Tuesday afternoon where Mr Ryan will be laid to rest alongside his late father Hack in the new cemetery in Ennistymon.

A post on the Ennistymon parish Facebook page confirmed that Mr Ryan’s burial, who died shortly before his 40th birthday, would take place on Tuesday but that it would be “totally private”. The Facebook post also paid tribute to the 156 fellow passengers who “entered eternity” last Match.

The Irish deputy chief engineer with the United Nations World Food Programme was one of 157 passengers from more than 30 countries on board an Ethiopian Airlines flight which crashed minutes after take-off en route from Addis Ababa in Ethiopia to Nairobi in Kenya on March 10th, 2019.

Originally from Lahinch, Mr Ryan was married with two young children and lived in Cork city. He was posthumously appointed chief engineer of the UN World Food Programme following the airline disaster.

The victims of the crash included a large number of aid workers and environmentalists who were travelling to the UN environment assembly which took place in Kenya last March.

Speaking last Friday following the publication of a report by Indonesian investigators into last year’s Lion Air crash, Boeing Chief Executive Dennis Muilenburg outlined changes planned for the so-called MCAS cockpit software that has been widely linked to the Indonesia accident and the crash of an Ethiopian Airlines jet five months later.

“We are addressing the (Indonesian accident agency) KNKT’s safety recommendations and taking actions to enhance the safety of the 737 MAX to prevent the flight control conditions that occurred in this accident from ever happening again,” he said.

The company’s previous statement, which included no comment from Boeing leaders and was viewed as clumsy by some family representatives, indirectly pointed the finger at Lion Air’s cockpit and ground crew by listing questions that the report hadn’t answered.

With dozens of lawsuits pending, Boeing has not admitted liability. But in March it acknowledged that MCAS was one link in a wider chain of events when an Ethiopian Airlines 737 MAX also crashed, leading to a worldwide grounding of the fleet.

In their final report on Friday, Indonesian investigators highlighted design flaws in MCAS software while also revealing errors or confusion among crew and faulting airline operations.

“It was not wise to blame the pilots after the first report and it could have been said differently,” said Paul Hayes, safety director at UK-based consultancy Ascend by Cirium.

“Yes, there were pilot errors but they should never been placed in that position inside the cockpit.” – Additional reporting Reuters