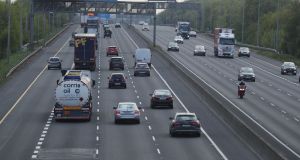 Traffic on the M50 in Dublin in April, 2020. Photograph: Nick Bradshaw/The Irish Times

Traffic volumes have fallen as the current level 5 restrictions on travel take hold.

When traffic levels on January 12th were compared with those from before Level 3 restrictions were introduced in October, the reductions were more significant.

In the case of the regional cities the changes in car traffic volumes on Tuesday, January 12th, compared with Tuesday 5th January were as follows: down 11 per cent on the M9 Waterford; two per cent on the N6 at Bóthar na dTreabh, Galway; one per cent on the N40 in Co Cork; and 1 per cent at the M7 Limerick.

Car traffic just south of the Border with Northern Ireland on the N1 at Jonesboro showed a decrease of 7 per cent compared with Tuesday, January 5th, and a drop of 44 per cent since before October, the last time inter-county travel across the State was allowed.

However TII, which monitors the traffic flow, warned traffic volumes in the vicinity of the N2, N3, N14, N15 and N16, in the Border region, are lower than at the motorway traffic counters. As a result figures for non-motorway border roads will display wider fluctuations in traffic figures than other traffic counters.

While the number of cars on the State’s main roads has dropped significantly since the recent move to Level 5 Covid-19 restrictions, the decline is not as sharp as that seen during the first lockdown last year.

When the restrictions were first imposed on March 27th, the number of cars on the main roads initially fell by up to 70 per cent.

Volumes recovered somewhat later in the year, to within about 15 to 20 per cent of the typical figures for 2019.