Covid-19: Holohan warns of high numbers of deaths ‘for next period of time’ 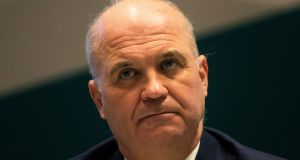 Ireland is going to experience high numbers of Covid-19 deaths “for the next period of time,” chief medical officer Dr Tony Holohan has warned.

He was responding to news of 46 deaths of patients with the disease on Tuesday, the highest daily figure in almost nine months. All but two of the deaths occurred this month.

Attributing the rise in deaths to “unsustainably” high levels of infection, Dr Holohan called on people to stay home “out of respect for those who have lost their lives” or were in hospital.

A total of 3,086 confirmed cases were reported yesterday, the lowest daily figure since New Year’s Day. More cases were recorded in Galway than in Dublin, despite it having a fraction of the capital’s population. In Monaghan, the worst affected county at present, one in every 38 people has the virus.

There were 1,700 Covid-19 patients in hospital yesterday evening, including 170 in intensive care, more than the peak set last spring of 155. One in three hospitalised patients this month has been aged under 65.

With HSE figures showing there were 52 outbreaks in nursing homes last week, twice that of the previous week, it emerged that one south Dublin nursing home – Simpson’s Hospital in Dundrum – recorded 15 deaths from the virus in an outbreak of the disease over Christmas and new year. The home declined to disclose the number of positive cases involved.

Meanwhile, the first 3,600 doses of the Moderna vaccine, the second vaccine to be authorised for use in Ireland, arrived yesterday. A HSE spokesman said it planned to roll out the vaccine as soon as possible and it was hopeful of increased deliveries in the weeks to come.

The Cabinet was told yesterday that booster shots could be given to vulnerable people to maintain their protection against the disease, as the State may end up with a surplus of vaccines. These could also be resold or donated to countries in need.

Minister for Health Stephen Donnelly told Ministers negotiations on a deal on GPs and pharmacists taking part in the rollout are expected to conclude soon, with consideration being given to indemnifying them.

The Cabinet heard that additional vaccine doses due to arrive under an EU deal with Pfizer/BioNTech – which will cost some €32 million – raised the prospect of a speedier resolution of the Covid-19 crisis. An extra 700,000 doses will come in the second quarter of the year, followed by 820,000 the following three months, and another 550,000 before the end of the year.

One source said “nearly everyone” criticised the communication of the plan. The meeting heard calls for daily vaccination numbers to be published, including through the Covid tracker app.

Nearly 500,000 people over 70 to receive Covid vaccine from their GP 17:07
Taoiseach wants European languages to be taught across all primary schools 17:07
Liam Campbell should not be extradited to Lithuania, court told 17:03
Homeless hostels in Dublin ‘perpetuate inhumane inequality’ 16:56
Man arrested after jumping barrier at Leinster House entrance 17:51

2 Taxing pandemic payment ‘could be unconstitutional’