Catherine Corless: 'There doesn’t seem to be a lot' in Mother and Baby report 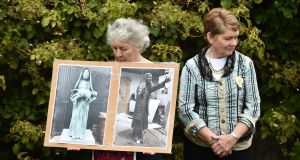 Down a puddle-filled alleyway, tucked behind a children’s playground in Tuam, a small enclosed patch of grass covers the remains of infants who died in St Mary’s mother and baby home, lying in unmarked graves.

Knitted children’s booties hang from the shrubbery that skirts the enclosure on the site of the former home, while a list of 796 names of infants and children is now tacked to a wall.

Images of the patch of grass filled TV screens around the world on Tuesday following the publication of a long-awaited report that examined the “appalling” conditions that existed in Tuam, and elsewhere.

Local historian Catherine Corless, who a decade ago published her findings in the Journal of the Old Tuam Society, said she felt “completely deflated” by the 3,000-page report.

“So far there doesn’t seem to be a lot in it … with a whole team of them, and what is at the end of it?” she asks, adding that she has not yet had the chance to read the report in full.

Though “exhausted”, Corless says the fight for the rights of survivors to get “care and recognition” continues: “I am speaking on behalf of the survivors; we need an apology.”

Saying she hopes for clear apologies, too, from the Bon Secours and the Archdiocese of Tuam, Corless says: “What upset me is Micheál Martin blaming us – society.”

From her living room in Tuam, Carmel Larkin watches Minister for Children Roderic O’Gorman present the key findings of the report to survivors of the homes: “Is that it?” she asks as the video on her iPad comes to an end.

She was kept in St Mary’s for five years and had hoped the Government would accept fully that the Catholic Church and State were to blame. “This seems to be all talk and no action.

“I don’t think an apology means anything … They are talking about redress but I think half of us will be dead before we get any redress,” she says.

Larkin wants to track down information about her mother, though she believes she is now dead. She knows her name, but nothing more. Did she enjoy crocheting and knitting like her daughter does, she wonders.

“I don’t even have a picture … I never got a cuddle from my mother,” she says, “I don’t even know if I have any brothers or sisters. I have no identity because I don’t know who I am.”

Survivor PJ Haverty (69) is underwhelmed, too. The speech by Taoiseach Micheál Martin and the snippets he had gleaned so far from the report were a “kick in the teeth”, he says.

“I am afraid to say too much, because I haven’t read the full report, but I really hope there is more to come. If there is more, then maybe people will say to me: ‘PJ, I am sorry about what happened to your mother.’ ”

Sprinkled throughout his dialogue he repeats that he is “one of the lucky ones” who escaped further institutions and was fostered by a loving family. He feels lucky, too, because he tracked down his mother.

“An apology might be all right for me, but then again I found my mother. What about the others? There are people who are still looking for their brothers and sisters,” he says.

“To think of the suffering those women went through is beyond belief. I want this put into the history books to show what was done. The kids of the future need to look back and see what was done.”

The next step in Tuam must be the exhumation of the infants from the mass grave, and a proper burial for them. “This should have been done long ago,” says Corless.

However, such efforts will create new problems, says David Burke, editor of the Tuam Herald: “I think it is going to be very disturbing to some people living in the vicinity that some of their gardens would have to be dug up.”

During his primary school days, Burke remembers that a row of desks were kept for the so-called “illegitimate” children, with others sent to join them as punishment for bad behaviour.

“It is shocking when you think about it, but as a child you just accept it,” he says.