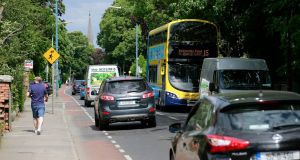 The figures also show a rise in the numbers of vehicles on suburban roads in south Dublin, at Brewery Road in Stillorgan and Mount Merrion Avenue, between the Stillorgan Road and Blackrock. Photograph: Nick Bradshaw

Traffic numbers on the State’s main roads and motorways have risen by up to 7.65 per cent over the last two weeks, confirming a steady rise which began before Easter.

Volumes on the key motorways in the State fell by as much as 80 per cent on the introduction of restrictions on travel on March 26th.

However, by April 9th traffic volumes on the State’s national and motorway class roads had risen by about 5 per cent, even as the Government asked people not to travel to holiday homes for the Easter holiday.

Latest data from traffic counters, which are set into roads and monitored daily, show traffic volumes continuing to climb on routes into the cities of Dublin, Cork, Limerick and Galway, with the largest volumes in the east of the country.

Data for the N25 approach to Waterford City was not available.

The figures also show a rise in the numbers of vehicles on suburban roads in south Dublin, at Brewery Road in Stillorgan and Mount Merrion Avenue, between the Stillorgan Road and Blackrock.

The data supports a trend noted in a network of on-street cameras in Dublin, which shows pedestrian footfall across the city rose in the week ending April 12th. Footfall was up in 12 of the 13 locations monitored, essentially all across the city.

Traffic volumes into Dublin from Wicklow, measured north of Bray on the M11, increased from 23,985 vehicles on April 7th, to 24,756 on April 21st. Both days were a Tuesday. While the number is significantly below the annual average daily traffic figure of 78,340 vehicles, it does represent a rise of about 3.2 per cent.

On the N7, the State’s second busiest road after the M50, between Newlands Cross and Kingswood traffic volumes rose from 39,450 on April 7th to 41,554 an increase of some 5.3 per cent.