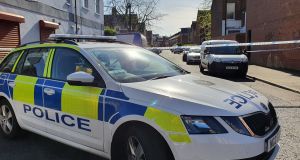 The scene at Haywood Avenue in south Belfast close to a flat where a 39-year-old woman’s body was found in the early hours of Wednesday. Photograph: Rebecca Black/PA Wire.

A man has been arrested after a woman’s body was found in a flat in south Belfast.

Detective Chief Inspector Darren McCartney said police were called to the property at Haywood Avenue at about 1.45am on Wednesday, where they discovered the body of a 39-year-old woman.

A 21-year-old man was arrested and has been taken to Musgrave police station for questioning.

“A post mortem examination will take place in due course to determine the cause of death however I am treating her death as suspicious at this time,” said Detective Chief Inspector McCartney.

“I am appealing for anyone who was in the area of Haywood Avenue late last night or early this morning and who seen or heard anything to contact detectives from the Major Investigation Team at Ladas Drive Police Station on 101 quoting reference 106 22/04/20,” he said.

SDLP Councillor Gary McKeown said people were “shocked at this incident in the heart of the community in Ballynafeigh.

“This is a very popular neighbourhood, so for something like this to happen has caused great concern for residents of the area.

“It is very sad that a life has been lost so suddenly, and my thoughts are with those close to the deceased.

“I urge anyone with information to contact police to help them with their investigation,” he said.