Josh Dunne (16) dies, and two others injured, in violent clash in East Wall on Tuesday night 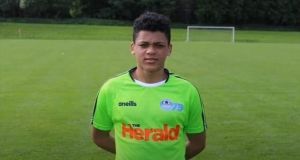 Josh Dunne (16) died after he was stabbed in Dublin on Tuesday evening. Photograph: YouTube

Friends of the 16-year-old who was fatally stabbed in Dublin’s north inner city on Tuesday night have described the teenager as a “loyal friend”.

Josh Dunne, from Ballymun, north Dublin, had hoped to have a career as a professional footballer.

A promising youth player at Bohemians/St Kevin’s Boys Club Academy, he had travelled to take part in trials for Scottish Premiership club Dundee United’s academy in 2019, and had been on the radar of other club scouts.

On Wednesday, a large group of his friends gathered on East Wall Road, to lay flowers near where the teenager had been stabbed the night before.

His friends described him as someone who was “loyal to the core” and would “always have his friends’ back”.

He was a student at Larkin Community College, Champions Avenue.

A large procession of his friends cycled past the taped-off crime scene on Wednesday afternoon, most with one hand on the bicycle handlebars and another holding bouquets of flowers to set down for their friend.

He was one of two teenagers seriously injured in what has been described as a very significant public order incident in the north inner city and taken to the Mater hospital. A man in his 20s was also reportedly injured.

The incident took place on East Wall Road at 9.20pm. Gardaí and the emergency services attended the scene and two male juveniles were taken to the Mater hospital to be treated for serious injuries. Josh Dunne was subsequently pronounced dead at the hospital. A murder inquiry has begun.

A third male has since presented to the Mater hospital to be treated for injuries.

‘He could play anywhere’

On the football pitch Josh Dunne lined out on the wing, but “he could play anywhere”, one of his friends said. He was a big fan of Chelsea FC, and the Republic of Ireland team.

He would rarely be seen without a trademark “cheeky grin”, one of the friends said. “You’d be fighting with him and he’d just give you a little smile, you couldn’t be angry at him,” she said.

He was the type of teenager that “got on with everyone,” another friend said.

An athletic young boy, his friends said that growing up he could turn his hand to any sport, and previously played GAA for Ballymun Kickhams before leaving to focus on his dream of becoming a professional footballer.

He came from a big family with several other brothers and sisters. Among the many flowers left at the scene was one with a card from his family. “Such a beautiful soul, a bright career ahead and taken so suddenly, we miss you,” it said.

Another was left by Adam, one of his best friends: “Josh bro, I loved ye so much and can’t put into words how heartbroken I am . . . Don’t forget to look over me and Kyle,” it said.

A postmortem will be carried out on the teenager’s body on Wednesday afternoon at the City Morgue by Dr Heidi Okkers, Locum Assistant State Pathologist.

A family Liaison Officer has been appointed to and continues to liaise with the family, gardaí said. The adult and the juvenile remain in hospital receiving medical attention.

Bohemian Football Club said everyone at the club was “devastated to learn of the death of Bohs-SKB player Josh Dunne in tragic circumstances”.

“Josh was a talented young footballer who will be sadly missed by former team-mates and coaches,” it said.

“We extend our deepest condolences to his family and friends.”

St Kevin’s Boys FC said members of the teenager’s team and coaching staff were “all devastated to hear the sad news”.

“Josh was a very talented footballer and well-liked by all his teammates and will be sadly missed by all of us,” a statement from the club said.

“In his time at St Kevin’s, Josh enjoyed great success with our DDSL Premier sides, DDSL representative team and the Bohs/SKB under 15 LOI team. At this sad time our thoughts and prayers are with his immediate family, extended relations, and friends.”

Tolka Rovers AFC Sports and Social Club, who Josh also previously played with, said it was “deeply saddened” to hear of his death.

“It was a privilege to have him play for Tolka Rovers FC and to watch him play football under the guidance of Coco, Kev and James,” it said.

“Our thoughts are with his family and friends at this very sad time. Rest in Peace Josh.”

Independent councillor Anthony Flynn, who lives close to where the incident happened, said the death was “a serious blow to the community”.

“It happened at the top of my road and I was one of the first on the scene last night. The community are in shock at what has happened,” he said.

“We’ve had some anti-social behaviour in the area over the last couple of months. Over the last week there’s been six knife crime incidents within DMR north central.

“It was a horrific sight for anyone who was there last night, in particular those members of Dublin Fire Brigade that were assisting with the incident.”

Cllr Flynn said an anti-knife campaign across the city had been called for at a policing committee with the Assistant Garda Commissioner for the Dublin region earlier on Tuesday.

“The fact is a young boy died last night and another young boy was seriously injured and my thoughts are with those families,” he added.

“We need a serious anti-knife campaign in light of the dramatic increase of incidents over the last week and in general as well the rise in anti-social behaviour.”

“I’d like to offer my condolences to the family of the deceased firstly and they are grieving at a time of heightened emotions, in addition to Covid,” he said.

“Across East Wall and North Wall there is a concern among the local community about a number of incidents in the last few weeks.

“There is a need for gardaí to have a more proactive approach in terms of public order policing of that part of the north inner city particularly from 7pm or 8pm onwards.

“Last week there was a stabbing incident in North Wall and prior to Christmas there was a similar incident on East Road, the very street where last night’s stabbing took place. Residents are anxious.”

Gardaí said the death followed a violent clash on the street. A group including teenage boys and girls was present, and gardaí believe a delivery driver was among the other people on the scene.

Gardaí were trying to establish if the delivery driver had been involved in a dispute with the teenagers.

During the disturbance – which prompted a very large Garda presence – two teenagers were stabbed. Although the third person was also injured, the nature of his injuries was unclear.