Officials to examine quarantine restrictions for all inward-bound travellers 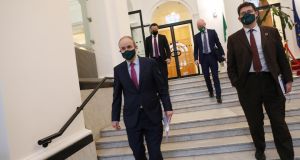 Urging people to “hold firm and stick to the basics” Taoiseach Micheál Martin announced the expected extension of Ireland’s third lockdown until March 5th last night, introducing new restrictions and warning that further curbs on travel and movement will be considered.

The move, widely flagged in recent days, came as the numbers of fatalities from Covid-19 in the State passed the 3,000 mark since the pandemic first hit last spring. Globally, the number of coronavirus cases recorded has now passed 100 million.

But there was good news yesterday too as daily reported cases fell below 1,000 for the first time in a month, and senior figures said they expected the numbers of new cases to continue to fall sharply.

Modelling by the National Public Health Emergency Team (Nphet) and shared with the Government shows that average cases per day will be between 800 and 1,400 by February 8th, and will drop to between 200 and 900 by the end of next month.

Mr Martin said that while numbers were decreasing, the real pressure points would remain hospital admissions and ICU cases, for another month at least. “That is why we have to keep pressure up on the virus and reduce it,” he said.

After a lengthy Cabinet meeting at Government Buildings, Mr Martin, Tánaiste Leo Varadkar and Green party leader Eamon Ryan announced a series of quarantine and travel restrictions and tougher enforcement of existing regulations, including new checkpoints near the Border.

Inside Business with Ciaran Hancock · Retail rent pressure / Ulster Bank: will it stay or will it go?
Coronavirus Data Dashboard

The Opposition criticised the Government’s approach, with Sinn Féin leader Mary Lou McDonald dismissing what she called “half-measures”. She called for quarantine restrictions to be introduced for all travellers.

Sources said this approach was discussed at Cabinet, and may be revisited in the weeks ahead. Officials are to examine the logistics, legalities and practicalities of the policy.

A number of Ministers raised concerns during the four-hour Cabinet meeting that some of the proposed quarantine rules were not strong enough and that the Government needed to provide full clarity on what exactly would be enforced in law. Ministers including Green deputy leader Catherine Martin, chief whip Jack Chambers and Minister for Higher Education Simon Harris spoke in favour of this approach.

The Cabinet was also warned that public-health chiefs believe there will be significant numbers of deaths associated with Covid-19 in the weeks ahead, but that as the virus comes under control, current levels of compliance with public-health measures will be difficult to maintain.

A letter from Nphet warned that it would be increasingly difficult to maintain the level of suppression of the virus achieved since the New Year.

Meanwhile Ministers say they are “optimistic” that a phased return of schools can begin in February and March, starting with schools for children with special needs.

After this, primary-school students and exam-year students will be prioritised. Dates have not yet been agreed for the different phases. Officials will meet this week to discuss potential contingency plans for the Leaving Certificate, but senior Government sources said they were “optimistic” that the State exam would go ahead this year.

The Government and its European Union partners are awaiting a decision on whether to approve the AstraZeneca Covid-19 vaccine on Friday. But there is a low amount of data on its use in older people from trials, European Medicines Agency chief Emer Cooke said.

“The assessment is currently under finalisation, and we’re very much hoping for a conclusion this week,” she told a European Parliament committee in response to questions from MEPs.

The British-Swedish pharmaceutical multinational is at the centre of controversy after it announced delays to deliveries of doses to the EU, prompting the bloc to consider imposing restrictions on the export of vaccines to other countries.