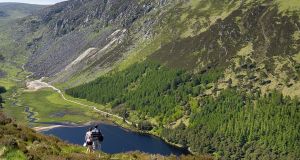 A couple enjoy the view over the Upper Lake from the Spink Trail in Glendalough, Co Wicklow. Photograph: Getty Images

Tourism Ireland is to increase its spending by €10 million to €45 million next year and mount its first new global advertising campaign in seven years.

Faced with the combined threats of a no-deal Brexit, a significantly weaker sterling and a 4.5 per cent jump in the VAT rate which applies to the hospitality trade, the tourism body said it would be looking to strengthen its marketing programmes in the months ahead.

Its new global campaign – “Fill your Heart with Ireland” – will begin next month in the United States, Britain, France and Germany, and from January in more than 20 markets around the globe.

Tourism Ireland said it had plans to grow overseas tourism revenue by 6 per cent to €6.5 billion and visitor numbers by 4 per cent to 11.67 million.

The campaign will include TV, cinema, print, outdoor and online ads, as well as content for social platforms . It will feature less-visited attractions and locations and aims to attract visitors all year round, highlighting outdoor activities like cycling, walking and kayaking.

Tourism Ireland also had plans to expand its operations in China – with new representation in Hong Kong – and increase its marketing activity in the US and Canada, as well as in emerging markets like Japan.

This year is set to be a record year for Irish tourism, with the latest estimates suggesting that by the end of Decemebr, revenue generated by international visitors will touch €6.1 billion, an increase of 10 per cent over last year.

A total of 320,000 people are now employed in the sector, catering for the 11.2 million visitors. The number of visitors jumped by 6 per cent on 2017, with growth recorded from all markets.

“2018 is set to be another record year for Irish tourism, surpassing all previous records and coming on the back of a number of years of strong growth,” said Niall Gibbons, the Tourism Ireland chief executive.

“And, I am delighted to report that we have seen growth from all our main markets around the world – with record numbers arriving here from North America, mainland Europe, Australia and emerging markets.”

He said Ireland was heading into 2019 “in a position of some strength, based on the success of 2018. Our aim is to spread this success throughout the year and around the entire island of Ireland – ensuring we maintain our renowned welcome and superb visitor experience.”

Minister for Tourism Shane Ross said there were “challenges for Irish tourism as a consequence of Brexit” but he expressed confidence the industry “can adapt quickly to enable continued growth from international markets.”