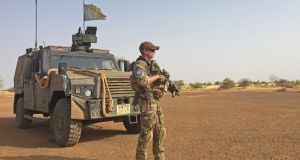 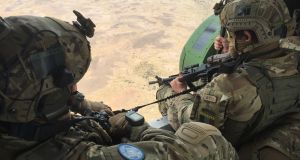 Military sources said the incident, which occurred while the Rangers were patrolling in a multinational convoy of vehicles, was a reminder of the dangers involved with the mission in the volatile African country. Photograph: Defence Forces 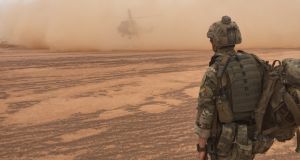 Ireland’s commitment to the mission was not expected to be affected by Tuesday’s events, as a robust and dangerous mission was expected and the troops prepared accordingly. Photograph: Defence Forces

Three members of the Irish Army Ranger wing serving in Mali were injured on Tuesday when their armoured vehicle struck a roadside explosive device.

The soldiers are expected to make a full recovery, having suffered only bruising and abrasions. Military sources said the incident, which occurred while the Rangers were patrolling in a multinational convoy of vehicles, was a reminder of the dangers involved with the mission in the volatile African country.

After the blast, about 75km east of Gao at 2pm, the injured Rangers were airlifted to their base and taken to hospital for treatment in Gao.

It is understood the Mowag vehicle which the Rangers were travelling in hit a concealed device by the roadside. Such devices are common, with Irish troops having hit one on a mission to the Golan Heights in recent years.

Troops from other countries serving on the same United Nations mission in Mali have been hit by roadside devices, while others have been killed in fire-fights or accidents.

However, this explosion was the first time Irish troops serving in the country were caught up in any such incident. “While conducting a patrol east of their base in Gao, three of our soldiers sustained minor injuries when an improvised explosive device exploded close to their convoy,” a Defence Forces statement said.

“Our personnel have received medical treatment and are safe and well and their next-of-kin and families have been contacted. The Defence Forces conducts intensive pre-deployment mission training in order to prepare our personnel for such an incident.”

Fourteen Irish soldiers from the Army Rangers Wing began phased arrival in Mali in September 2019 to serve with the 15,000-strong UN force, Minusma. This UN mission is regarded as the most dangerous such mission in the world – to date more than 200 of its peacekeepers have been killed by gun attacks, car bombs and improvised explosive devices.

Ireland’s commitment to the mission was not expected to be affected by Tuesday’s events, as a robust and dangerous mission was expected and the troops prepared accordingly.

The UN mission in Mali is aimed at stabilising the country, but is controversial in that it is the first UN mission that involves international troops helping the Mali authorities to take back some of their territory from terror groups.

The crisis has its origins in the events of 2012, when Islamists took advantage of a Tuareg separatist uprising and took over much of remote northern Mali. There they imposed sharia law and threatened to sweep south towards the capital, Bamako. A French military intervention stopped them in their tracks, but the Islamists adapted as an insurgent force and the UN was deployed. Given northern Mali’s position on a key strategic corridor, the international community is heavily invested in the task of restoring stability.