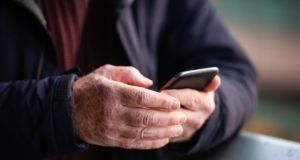 It is important that people – or those close to them – check what kind of phone package they are on to ensure they don’t experience a sharp increase in charges. Photograph: Getty Images

A Dublin man in his 80s who saw his monthly mobile phone bill increase by 400 per cent between February and March as a result of charges incurred while cocooning will have the cost waived by his provider following the intervention of this newspaper.

Bill Power from Fairview wrote to The Irish Times last week to highlight the sky high charges and his letter was published on Monday.

“ My phone bill arrived from Three. It was €125,” he wrote. “My usual bill is in the region of €25. I am 85 and self-isolating. Like many of us older people, my only contact with my family is by phone. Are the phone companies going to profit from our plight?”

After the letter appeared this newspaper got in touch with Mr Power and asked if he would like us to intercede on his behalf with the company.

He agreed and we made contact with Three which – to its credit – showed an immediate understanding of the situation and moved swiftly to resolve it for Mr Power.

Within 24 hours the company had been in touch with his daughter to say it was willing to waive the charges “as a good will gesture”.

As part of his plan he had 150 minutes of calls and “heavily exceeded this and was charged accordingly the out of bundle rate,” the provider said.

Customers who make calls or use data above their bundled rate can frequently be hit with swingeing charges of as much as 35 cent a minute for phone calls and more than 17 cent for each text above their allotted allowance sent.

He was told that in order to stop this from happening “he will need to monitor his allowance on his price plan. This can be done on either the My3 App or on Three.ie website.”

That would be a big ask for anyone at the best of times, never mind an 85-year-old man who is self-isolating as the worst public health emergency in a century ravages the world.

“Alternatively he can avail of a sim only plan which provides unlimited calls, texts and internet for €30 per month,” the company said.

While Mr Powers has the good sense to write to this newspaper to air his concerns, there are likely to be many people who will find themselves in a similar position in the days ahead.