Coronavirus: Irishwoman in Cayman Islands on living under 24-hour lockdown

People who break the Covid-19 curfew face penalties of up to €3,300 fine or prison 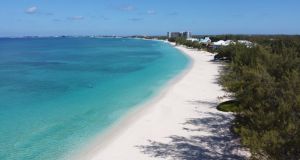 An unusual sight: No people on Seven Mile Beach in Grand Cayman during coronavirus restrictions.

Lainey Broderick left Ireland with her husband Paul a decade ago to live in Grand Cayman. The Cayman Islands is a British overseas territory in the Western Caribbean Sea, situated to the south of Cuba, and northwest of Jamaica.

This was not the article I had planned to write. I was looking forward to sharing a story about the first ever St Patrick’s Day ball in the Cayman Islands. I was going to tell you all about our “Green Tie Gala” and about how we had 500 plus people come together to celebrate the great community between Ireland and Cayman. But instead I write to you from lockdown.

Not Leo’s “lockdown”. Not a Boris “lockdown”. An actual 24-hour lockdown where we are not allowed outside our front doors unless it is an absolute medical emergency. Today even supermarkets and banks are shut. There are no cars on the roads. There are no people out walking. The only sound is that of Mother Nature - the cockerels crowing, the rustling leaves of the palm trees and the cheerful chirping of the birds - all blissfully unaware of the crisis the human species is facing.

The islands now have fluctuating “hard” and “soft” curfews, and they can be implemented different days. Sundays are now hard curfews where people are not allowed outside all day and night, and we’ve just had three continuous week days of a hard curfew. Other days the curfew means people are not allowed out from 7pm to 5am, but certain people are permitted to take pre-agreed journeys between 5am to 7pm. Police checks stop vehicles and check ID.

There are restrictions based on surnames on when you can go to the supermarket or pharmacy on “soft” curfew days. Police can issue an on-the spot fine of KYD$500 (€552) for supermarket shopping outside of your allotted day.

You are allowed exercise, run or walk, for a brief time those days, but no water sports are allowed, and the swimming pools are closed.

The airport has been sealed since March 22nd and is expected to stay shut until at least May 30th. We’ve had one chartered flight since it closed to bring supplies and Caymanians back to the islands, and fly out expats who wanted to return home.

All businesses are working from home, or if that is not possible, closed. The days with 24-hour lockdown is made easier with work to do, technology to communicate, and space to live and move in comfortably. I count myself lucky as I have food in the cupboard and an office to return to.

Being on a small island during a coronavirus pandemic has both advantages and disadvantages. As an island we are in a better position to stop the spread of the virus if the small community, which normally is about 65,000 people equal to the population of Co Sligo, adheres to the rules that have been put in place. At the first hint Covid-19 could possibly being on island, the Cayman Islands Government (CIG) stepped in quickly and closed all schools in early March initially for six weeks. They immediately put a limit of 50 people in any one place and implemented social distancing rules, after just one case being confirmed.

Sanitising stations appeared overnight, and since then there is a daily press conference giving the latest updates. These measures at first seemed extreme to us as not many other countries had similar restrictions at the time.

The first confirmed case of coronavirus on the islands was an older Italian man who had been on a cruise ship. He was taken to one of the hospitals with cardiac issues on February 29th. It was at a time when we hadn’t really heard much about Covid-19 here. He was later diagnosed with coronavirus, which was announced in a press conference on March 12th. The hospital was then closed and all staff put into isolation. That weekend, two days later, he died. His wife was put into quarantine. Her life changed from going from a cruise ship holiday with her loved one to being widowed in a foreign country and in quarantine. From that point onwards, things changed quickly here on the islands.

Curfews were implemented, all hotels and restaurants were shut, and several expat workers rushed to fly home before the airport closed. Social gatherings were limited to 10, and then restricted to two people.

People await local conferences daily wondering and worrying what is going to be today’s update. I watch the news from Ireland avidly – each day worse than the last. All of this creates fear and anxiety. The isolation heightens this and reinforces loneliness. Cayman has stepped up in this regard, providing mental health services and helplines, and the information available has never been so forthcoming.

But this forced time apart from each other physically has also seen many of us communicate across the world more than we ever have virtually. I’ve connected with friends from school and family from globally. I’ve often struggled to do this before with time differences and other daily obligations, but that has changed now. Zoom, Houseparty and WhatsApp groups have been set up like never before. Whether here, Ireland or wherever people live, we’re united together in facing this health crisis globally.

Earlier in March, the CIG stipulated that we all had to work from home. Only essential services such as medical and grocery could remain open. If a business believed they were essential and needed to have staff come into work, they could apply for an exemption. Panic ensued and overnight there were requests for more than 850 exemptions with a total of about 20,000 workers. The government then rendered it impractical to put these regulations in place, the police force is not large enough to enforce the numbers, and in response, shut down the request portal and initiated a 24/7 lockdown.

Now in April the Cayman Islands has seen a rise in numbers with 45 positive cases and one death. This does not seem much on the scale of the numbers happening around the world, but this is where the disadvantages of being on a small island come into play. The World Health Organisation’s (WHO) mantra is to test, test, test, but at the moment this is not practical here. All the test kits need to be sent to us in the first instance, and many are sent off island to be confirmed as coronavirus cases. We have very limited medical capacity to serve an epidemic and what country is going to let us airlift a Covid-19 infected patient to it?

We have no means of manufacturing medical equipment, never mind food production. There is some on island farming and fishing, but the vast majority of the island’s produce is shipped in or brought by air. If the contamination spreads, as with countries before us, residents have nowhere to go. People and necessary supplies cannot get in or out. If a loved one contracts Covid-19 in Ireland or elsewhere, we cannot get home. If a loved one dies from this this virus, we will not be at their funeral.

The premier of the Cayman Islands Alden McLaughlin announced a 24-hour full lockdown from last Wednesday night to Saturday morning: “We know this is a really radical measure but anyone who is paying attention to what is happening in the rest of the world must understand if we get widespread community transmission of this virus, it is going to have devastating consequences.”

He takes a hard stance but one I admire. He said that if the strategy succeeded that schools, construction, banks, financial services will be able to reopen. I hope we will get there soon. Stay safe. Stay home.