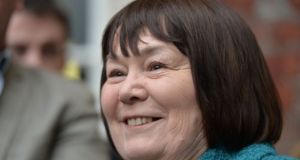 Ms Gibbons, who was a qualified social worker, was the founding chairwoman of Tusla, the Child and Family Agency, from 2014 to 2018 and also director of advocacy at Barnardos from 2005 to 2012. She died at her home on Wednesday after having suffered from cancer.

Born in 1952, she had also been a member of the Commission to Inquire into Child Abuse, chaired the Roscommon Child Abuse Inquiry and co-chaired the Independent Child Death Review group.

The President said Ms Gibbons was “an inspirational figure and a powerful voice” who championed the advancement of children’s rights in Ireland.

“Driven by a profound sense of social justice and empathy, Norah Gibbons has left an enormous legacy, not only for the children of Ireland but for all those who cherish the values of equality that underpin our republic and democracy,” he said.

“Sabina and I express our deepest condolences to her family, friends and former colleagues.”

Minister for Justice Charlie Flanagan described her as “an exceptional woman who brought her innate judgement, common sense and humanity to everything she did”.

“She leaves behind a tremendous legacy, in particular for the children of Ireland,” he said.

“During her final illness, Norah continued to work to help others, through her leadership of the independent study on familicide and domestic homicide. It was typical of her resolute sense of purpose that, in recent weeks, she was keen to ensure that this important work would be completed and I was glad to be able to give her that assurance.

“All through her life, she was a passionate and tireless advocate for children and others in vulnerable situations.”

Minister for Children and Youth Affairs Katherine Zappone said Ms Gibbons was “passionate and indefatigable” in her service to children and the State.

“I worked closely with her when she chaired Tusla and I admired her determination and focus on establishing our first dedicated agency for children and families,” she said.

“Her establishment and leadership of Tusla placed children and families at the centre of Irish law, policy and public service.”

In a statement, Tusla said Ms Gibbons was “a tireless advocate for the rights of children, who inspired so many around her”.

“Today we remember Norah Gibbons for her long and outstanding contribution to public life on many important issues, including tirelessly advocating for vulnerable children, young people and the most vulnerable in our society,” Tusla’s chief executive Bernard Gloster said.

Suzanne Connolly, chief executive of Barnardos, said Ms Gibbons joined Barnardos during the 1990s as a social worker before serving as director of advocacy for the children’s charity.

“Her energy, commitment and passion for the rights of children in Ireland changed many children’s lives for the better, and she will be remembered by many,” Ms Connolly said.

Ms Gibbons also served as both a director and chair of Alcohol Action Ireland. The organisation said “her outstanding contribution to Irish public life, her passion to tackle inequality and commitment to improving the lives of so many will be long remembered”.

Women’s Aid Ireland described Ms Gibbons as “an inspiring woman, so dedicated to social justice and the care, protection and prevention of cruelty toward the most vulnerable”.

Ms Gibbons is survived by her husband Seán, son Miles and daughter Maireas.