‘Jaysus’ tweets trend, outdoor movies from your garden, and an Irish croque monsieur 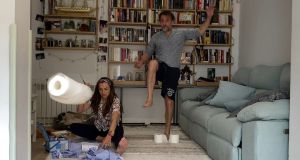 How to make a comedy out of a crisis

Drama can make sense of our lives in many ways, but getting the balance right with black humour can be a challenge right now. So fair dues to the Spanish, so traumatically hit by Covid-19, who have managed to excavate humour from the crisis in the shape of a new sitcom about life in lockdown, Diarios de la Cuarentena, or Quarantine Diaries. The RTVE comedy ranges from Herculean efforts to keep children from interjecting in conference calls to fitness classes derailed by daytime drinking. Shooting it sounds like a Herculean effort too: it’s being filmed under lockdown so involves 10 different houses where actors are shooting themselves and being directed, via Skype, by Álvaro Longoria – who says: “We are in no way trying to make fun of the people that are suffering. The focus is on those trying to make normal life out of an extraordinary situation.” The producer’s fee from the project was donated to buy protective gear for healthcare workers.

The pleasures of Twitter #462: People sharing their photos of the supermoon on social media. But the pleasures of Twitter #463: “Jaysus” was trending last night, driven by random tweets that included one of our favourite mild profanities. They range from his mother’s advice (“Ah jaysus Conor, would you ever cop onto yourself?”) to Conchur Moicleir via Ian McCourt’s observations about vintage Harp ads (“Jaysus. They don’t make ’em like they used to”) to the size of Helen Jamieson’s Yorkshire puddings in the oven (“Jaysus!! Size of me puddings lads!! Whoppers”).

Life’s changed for us all, and the Irish Times children’s art competition invites younger folk to express those changes in art. Anyone 16 or younger can enter the “isolation art” contest with a painting or drawing based on their experience of the past weeks. Entries will be judged by the children’s illustrator and environmentalist Don Conroy, with prizes of book vouchers from Dubray Books.

Classic movies projected on to the end of the terrace for the neighbours: it’s a class act from Scott Duggan in Cork. The freelance stage carpenter and production manager had what his neighbour Clare Keogh called “the most beautiful idea” when she posted photographs of it. Neighbours on their street listened to the movie on an FM signal while sitting in their separate front gardens watching it on the gable wall – surely a definition of coming together by being apart. Duggan, who has also posted that he’s available to help out people in self-isolation (as a handyman with a van), sent his audience’s donations to AgeAction.

Saudi Arabia is battered by coronavirus, with as many as 150 members of its royal family said to have contracted the disease, a situation one wouldn’t wish on anywhere. But one positive for the residents of Yemen is that Saudi Arabia announced yesterday that it and its allies would observe a unilateral ceasefire in the war in Yemen, starting at noon today, which could mark the start of the end of the brutal five-year-old conflict. It’s the first such act attributed to the pandemic, even if it comes two weeks after the UN secretary general, António Guterres, pleaded for a worldwide ceasefire because of the coronavirus.

Enough with the yeasts and the kneading. Soda bread takes about five minutes to make from four ingredients, and is both delicious and part of what we are. Try this soda-bread recipe by the chef Aran McMahon (of Rua deli in Castlebar), and his tip for making it into a fancy cheese on toast, in today’s Kitchen Cabinet, for croque monsieur on soda.