One Year On: Winter storm of 2018 delivered more snow than seen in decades 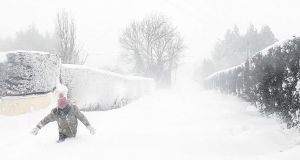 That was the front page of our newspaper on this day last year, as the Beast from the East threatened to bring the most severe blizzard seen in decades.

Taoiseach Leo Varadkar pleaded for people to stay indoors as the weather system met Storm Emma and its 100km/h gales.

The Beast lived up to its name delivering more snow than had been seen since the 1980s. All flights in and out of Dublin and Cork airports were cancelled, as were most forms of public transport.

Schools were closed and supermarkets were cleared of fresh stock as people panicked over red weather warnings and severe conditions.

A Lidl on Fortunestown Lane in Tallaght was looted with a mechanical digger, which was used to take the roof off the building and lift out the safe. The building was destroyed in the process.

Roads were treacherous, almost 150,000 homes lost power and many employees were sent home from work as the worst of the forecasted snow did, indeed, land.

A number of people sleeping rough and refusing to go into emergency hostels were sectioned and taken into care under the Mental Health Act. One woman, with serious mental health issues, was sectioned after being found sleeping in a hole in a wall.

The snow was so deep that in one instance gardai had to ask a woman they were trying to rescue to put her handbag on the roof of her car so they could locate her.

Water restrictions were put in place after the storm put serious pressure on reserves and hospital outpatient appointments had to be rescheduled.

In total, 3,300 local authority staff, 2,200 individuals from the fire service, 1,900 Civil Defence volunteers and 1,300 troops from the Defence Forces were involved in the clean-up operation.

Minister for Housing Eoghan Murphy justified the State’s response as proportionate and attributed the precautions as one of the reasons why the storm had ran smoothly.

The country was largely back up and running by the following Wednesday, almost a week after the beast landed.

The Phoenix Park weather station recorded a temperature of minus 4 degrees on this day last year. Today, temperatures are forecast to reach 14 degrees in some places.

Simon Bracken, a journalist with The Irish Times, shares his own tale of woe here:

“Ball burst, go home.” My housemate thinks I’m mad. I’m contemplating making what Teresa Mannion would deem an extremely “unnecessary journey”. It’s February 28th, 2018, the Beast from the East is on its way and the country is going into lockdown.

For weeks I’ve been planning a trip to Bristol. Booked flights, concert tickets and a week off work. Today is the day. Timing has always been one of my strong points.

Ryanair cancelled my first flight which was supposed to leave at 12.30pm. And my second. Dublin Airport is a no-go zone. Cork is soldiering on but will soon call it a day. Shannon is the only one left standing.

There is a flight from Shannon to London Stansted at 11pm. It’s a leap of faith - if I go and the flight is cancelled I could be stuck in the airport for days.

Leo Varadkar is warning of “exceptional blizzard-like” conditions on Thursday and imploring people to avoid doing exactly what I’m about to. It’s only going to get worse from here.

Thirty minutes on the bus into Dublin city centre, two hours on the train from Heuston station to Limerick. Another half-hour on the bus from Limerick to Shannon.

I make it to Shannon. There isn’t the slightest indication of the chaos elsewhere and, oddly, not a hint of snow or wind. The place is practically deserted apart from the disparate band of pilgrims who’ve dragged themselves here, hoping to catch the last chopper out of Saigon.

We make our way to the gate, and we wait. And we wait. Everyone is nervous. Swapping stories of how they ended up here.

“How far do you have to go when you get to London?”

The attendant announces there’ll be another 45-minute wait as they de-ice the plane. Everyone troops off to the bar to pass the time and settle some nerves. Minutes later pints are being downed as we’re called back. The attendant misheard. It was 4-5 minutes.

Finally, mercifully, we board the plane and head for London shortly after midnight.

Arriving at Stansted we get a sense of what all the fuss was about. It’s absolutely Baltic and snowing heavily. We troop into the arrivals area. People are scattered everywhere. Some trying to sleep, babies foiling those plans. Others desperately looking for a way out of there before the hammer comes down.

There are no buses to Bristol at this hour so it’s either stick it out here for the night and hope for the best in the morning or try to get to Paddington to catch the first train.

I head out into the night again and join the enormous queue for the buses. My hands are numb, my gloves having long since given up on the enterprise.

There is a man at the front of the queue who has been standing in the wrong line for about 30 minutes. He looks fit to strangle the frozen steward who is trying to break the news that he will have to line up again. Everyone is nearing breaking point.

Eventually the bus arrives, and a handful of people trudge on board. While I’m thawing out, in the seat in front of me an Italian girl takes out a bread roll she can barely hold. Rarely has food been so welcome.

Along comes the extraordinarily dedicated driver. “No eating on the bus”. The girl looks ready to cry.

I skate along the ice into a deserted Paddington station at about 2am and I wander up to the machine to buy a ticket. That’ll be £100. One-way. At 5am. In the middle of a blizzard. The mind boggles.

By 4am a band of zombies have gathered at the station. It appears to be snowing inside if that’s even possible. Thankfully for us, the girl running the coffee station takes pity on us and opens early. The restorative power of a cuppa never ceases to amaze.

The 5.19 to Swansea arrives and I hop on and almost instantly fall asleep. As the train rolls into Bristol Temple Meads it has just gone 7am. One flight, two trains, three buses, suspected frostbite and almost 24 hours with no sleep. But I’ve made it.

I read that Paddington has closed for the day. That was one of the last trains out. I feel like Indiana Jones. Only without his nice warm fedora.

I wander into WH Smith’s and get something to eat and wait. And I wait.

I look up. There she is. Wrapped up in a parka with a beaming smile and tears in her eyes. It was all worth it.